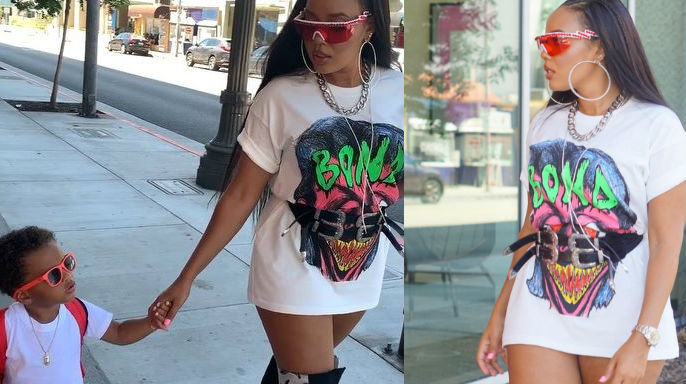 Angela Simmons is receiving backlash for an outfit that she wore while out and about with her son, Sutton Tennyson Jr. Social media critics are calling the celebrity mom out for sporting inappropriate attire.

Angela shared pictures of her and little Sutton spending time with family in Los Angeles earlier this week. One video clip showed the celebrity mom walking down the street with her son in tow. “Strolling,” Angela captioned. “Cali vibes be like,” the celebrity mom hashtagged.

Angela wanted her fans to appreciate the confidence that she and Sutton exhibited while spending a day in Los Angeles. Some critics, however, noticed her t-shirt dress and scrutinized Angela for her style choice. “That is not appropriate for you around your son,” one Instagram critic wrote. Another said, “Inappropriate attire in front of a child. Mother, please do better.”

While there were some who found Angela Simmons’ outfit completely inappropriate, there was the other group of Instagram followers who praised the celebrity mom for her fashion sense. “Sexxy Mommies Matter,” one defender shared. “[I] see NOTHING WRONG WITH THIS! She’s Sexxy! Successful! SMART! And in total control of her and son’s OWN LIFE! #DOPE.”

Another of Angela’s supporters wrote, “People really taking this seriously … She works in the fashion industry! Everything she’s posting, she is profiting in some form or ‘FASHION.’ People lame asf for hating … Her son eating good and vibing with his mama.”

Of course he picked this outfit himself lol .. and then he looked at the picture with his hat sideways and changed it to the front 😂. Reminds me of his Dad in the next shot . Swipe over. He literally took it off … and put it forward on his own , like what Sj ? 😊😂 actually his Dad picked this shirt for him when we went shopping a while back ♥️

MARIAH CAREY ON RAISING KIDS IN THE SPOTLIGHT: 'I TRY TO KEEP THEM GROUNDED'

MARIAH CAREY ON RAISING KIDS IN THE SPOTLIGHT: 'I TRY TO KEEP THEM GROUNDED'