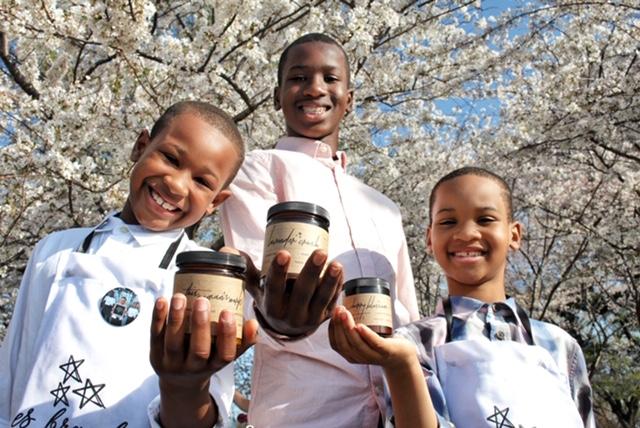 After showing their mother their toy wish list, the Gill brothers were given a special task by their mother-get a job. And get a job they did!

Back at work! Came in late last night, Collin has to be in the football field at 6:45am, we had to pick up some supplies, pack orders, did another TV interview via FaceTime, and now back to making products. Back to our hustle and grind!

“I told them, you need to get a job or start a business, and they decided to start a business!” Celena Gill, 44, told People Magazine in and interview. “We researched what kids’ businesses were successful…they asked me what I liked best and I said candles, so they stuck with candles.”

And what a successful venture it has been for Collin 13, Ryan 11, and Austin 8.

Thank you @shopify for featuring our story of how we got started! Your support has been amazing!!!!❤️ Story #linkinbio. 📷: @chaneljaaliphotography

Together, the three Maryland boys, making candles by hand, launched a Shopify store named Frères Branchiaux. In addition to being entrepreneur’s, the boys are also philanthropists where they donate 10 percent of their monthly profits to homeless shelters in D.C.

Thank you @washingtonpost! We are so grateful for the article. Our mission was always beyond toy money—helping the homeless has always been in our hearts—thank you for helping us spread our message.❤️Article #linkinbio!

“Ryan, he’s always wanted to give back to homeless people,” said Gill in her interview. “Even when he was younger, he wanted to collect care kits for homeless people. So he asked if we could give a portion of the profits to homeless shelters and that’s what they’ve been doing since they started.”

Candles are priced from $18 to $28 and can be purchased on the boys website. The boys also travel to festivals and other events to sell their product with the goal of one day having a “candle truck.”

“It’s like a food truck that sells candles,” Gill says. “That also doubles as training because they want to hire people from the community [who are] homeless. So they won’t just donate, but do something productive and create jobs.”

We cannot wait to see what the future holds for these three amazing young men. We have a feeling that we will one day, without a doubt, see an entire fleet of “candle trucks” traveling around town. Stay tuned into their journey by following these young entrepreneurs on Instagram.