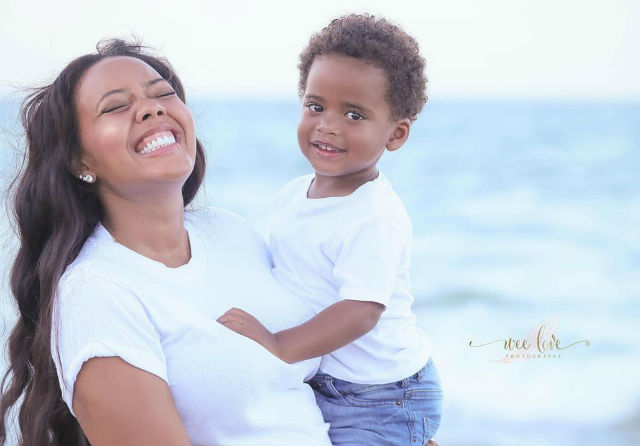 Angela Simmons and her son, Sutton Joseph Tennyson Jr., are everything you need to end your day on the right note. The celebrity mom recently shared pictures from her and her “mini me’s” photoshoot that are simply cute!

Who does this kid think he is lol ? Slight smile 😏 haha 📸: @weelovephotography

One candid of Angela and Sutton shows the mother and son smiling from ear to ear. Angela is so excited that she closes her eyes. Little Sutton, however, focuses on the camera in front of them. “There’s no match of love. The place you hold in my heart. Blessed to share my life with you, little one,” Angela captioned underneath pictures of her with her son.

“As a mother comforts her child, so will I comfort you”Isaiah 66:13 There’s no match of love. The place you hold in my heart. Blessed to share my life with you little one😁 swipe to see how big you make me 😊 📸 : @weelovephotography Hair : @paigepatrice_

Another series of candids show Sutton bonding with his godfather. “He got him,” Angela wrote.

Little Sutton has been hanging with the big guys a lot these past few weeks. It was back in June that the youngster spent the day with his grandfather, Rev Run, in honor of Father’s Day. Angela was shocked to hear the music blasting in Rev Run’s car upon her son’s return from a day of fun with his grandpa.

“What in the world,” Angela asked. “SJ, what is going on? Are you listening to music,” she inquired. Sutton was so excited that he appeared to want to stay in the car with his grandfather. “You don’t want to get out,” Angela asked her son.

My Dad aka PaPa taking Sj out for the day .. and when they came back 😂 with the music blasting . I cant take it . @revwon Daddy… think Sj wants a Bently 😫

This Father’s Day was significantly different for Angela Simmons and her son because of Sutton Tennyson Sr.’s absence. Angela lost her son’s father to gun violence last November. The celebrity mom wrote a touching note in honor of Sutton Sr. on Father’s Day.

“Words will never be good enough … to fill the voids I feel for our Baby Boy,” Angela shared. The celebrity mom went on to tell her son’s father, “Happy Father’s Day! You are missed.”

JOSELINE HERNANDEZ PENS TOUCHING NOTE TO DAUGHTER: 'YOU ALL MINES'

JOSELINE HERNANDEZ PENS TOUCHING NOTE TO DAUGHTER: 'YOU ALL MINES'