"I Decided To Play By My Own Rules" 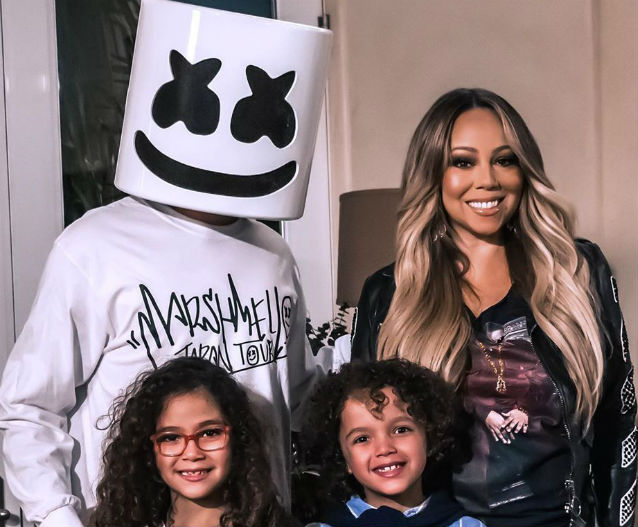 Mariah Carey and her kids, Monroe and Moroccan, are having fun on tour. The singer’s twins were recently photographed while playing charades and having loads of fun with Marshmello.

Marshmello is the American DJ who’s persona hinges on a touch of mystery. Many wonder about the physical appearance of Marshmello since the artist wears a mask that resembles a marshmallow over his face while in public. Still, Mariah and the kids enjoyed their time with the rising star. “Playing charades with @marshmellomusic and Roc and Roe,” Carey told her fans earlier this week. “Naturally, I decided to play by my own rules,” the recording artist said.

Monroe and Moroccan have been on tour with their mom all summer long. The twins recently took the stage in Amsterdam while on their mom’s Caution World Tour. Roe and Roc were in full freestyle mode as they said much of what came to their minds while onstage with their mom.

“The twins have been on tour all summer with their mom,” Nick Cannon recently told media of his kids’ adventures with their mom. The celebrity father also told the media that he enjoys the excitement that comes with having more than one job.

“They always say I’m a hustler, man,” Nick revealed. “I always have that mentality — you have to keep cooking while the pot is hot,” he added. “They keep giving me jobs and I keep creating. That’s what it is. I keep trying to create opportunities for our community and for our people, so I’m at that mindset,” Nick concluded.