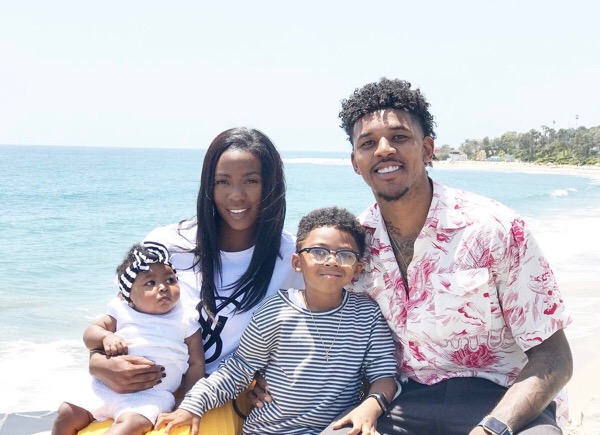 Keonna Green, Nick Young, and the kids were near the ocean

Congratulations to Nick Young and his girlfriend, Keonna Green, on the arrival of their son, Nyce Amaru Young. The celebrity couple named their newborn after the late rapper, Tupac Shakur.

Little Nyce Amaru was born on Thursday, June 27, 2019. Nick Young shared a candid of him bonding with his son who held his father’s finger shortly after his arrival.

More than 100,000 Instagram fans liked the cute photo of Nick holding Nyce’s hand within a matter of hours. “Congratulations,” dozens of fans wrote. One follower even said that little Nyce almost shared a birthday with one of their family members. How cool would that have been?

Nick Young told his Instagram that he would name his son after Tupac Shakur a few weeks ago. “Hopefully the [baby will be born on the] 16[th] on 2pac (sic) b-day,” he shared. “I’m naming him Nyce Amaru Young or Nyce Shakur,” the celebrity father said.

Between telling Nick where the good lighting is to begging my kids to act right for the picture, this is the best I could get. Either way I’m grateful for them all. Happy Mother’s Day to all the amazing mother’s out there. Wishing you all a bless day.

Nyce Amaru comes after Nick Young and Keonna Green’s second expectancy, which took the celebrity world by surprise in 2016. Many did not know that Nick and Keonna had reconnected romantically, thus, the public sphere was quite shocked to learn that the celebrity parents were expecting a child.

BCK Asks: Do you think Nick Young and Keonna Green will have more kids?