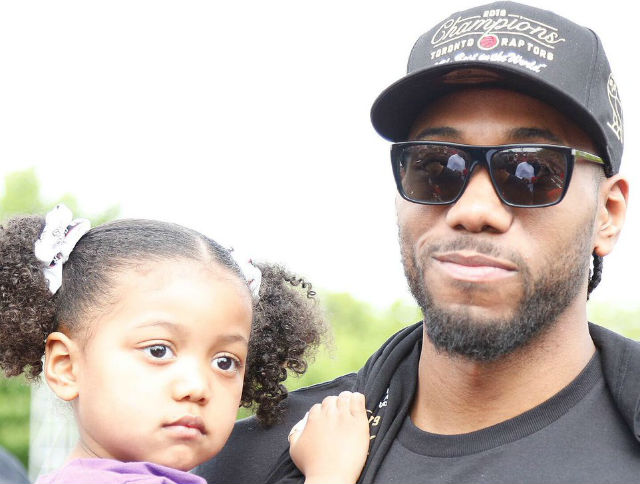 Kawhi Leonard and his rumored wife, Kishele Shipley, are going viral for all of the right reasons. The celebrity couple managed to get their daughter, Kaliyah, to sleep during the Toronto Raptors’ championship parade and some online are calling the moment parent goals.

In the popular picture, Kishele sits next to her daughter who is resting soundly on the parade bus. The moment is so serene that Shipley has time to talk to Kawhi and view the sea of people who came out to celebrate the Raptors.

“Even his baby stays on brand,” one Twitter fan wrote. Another social media follower tweeted, “I wonder who she gets it from. So chill.”

Kawhi is often presented by the press as unbothered. The Raptors player, however, remains adamant about keeping his personal life as private as possible. Leonard became a viral sensation last year when he told a reporter that he was not going to share details about his life with the world.

“I’m a fun guy,” Kawhi revealed. “Obviously, I love the game of basketball,” he added. “I mean, there are just more questions that you have to ask me in order for me to tell you about myself. I just can’t give you a whole spill.” Kawhi told the reporter that he was not aware of his location in the press room before letting out a laugh that was heard across the nation. Even Kevin Hart could not help but laugh at Leonard’s chuckle.

Kawhi Leonard and Kishele Shipley allegedly welcomed a son a few months ago.