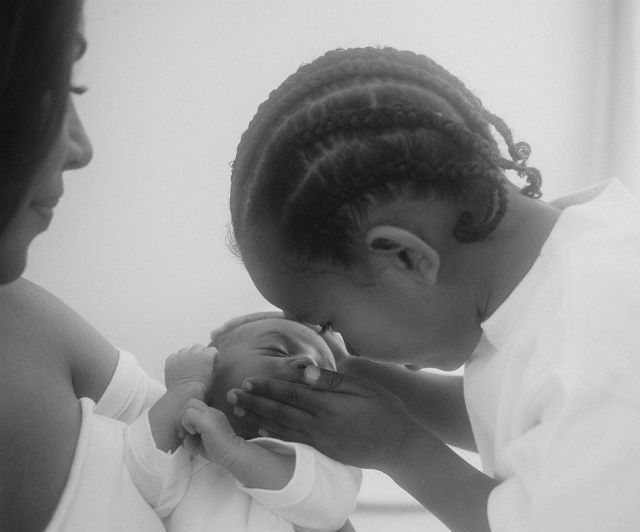 Saint West is a doting big brother to his baby brother Psalm West!

The 3-year-old son of Kanye West and Kim Kardashian-West was photographed looking adoringly at his little brother as mom Kim watched on. “My boys,” Kim captioned of the black and white photo.

The adorable snap has already garnered millions of likes and counting.

Kardashian-West has previously stated that Saint was just as affectionate with his sister Chicago West when she was born.

“He’s nicer than [daughter North], I will say that,” said the Keeping Up with the Kardashians star during an interview with Ellen. “He loves his little sister. He’s so sweet with her.”

She added, “I always have to watch out for him — he smothers her, and he has this really big hair so he just jumps in her crib.”

Baby Psalm was born on May 9th to the Wests to an undisclosed surrogate. Though Kardashian carried North and Saint herself, health issues prevented her from carrying her two youngest children,  son Psalm and daughter Chicago.

According to his birth certificate, Psalm does not have a middle name. His name is in fact just Psalm West, but Kim recently posted a photo of her baby boy with the caption “Psalm Ye”, which has fans thinking that his middle name is “Ye”.