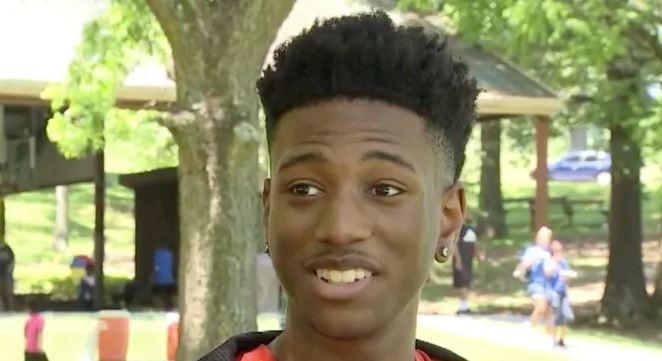 Senior year, for most, is a challenging time. Students have to not only deal with making the grade in the present, but they have to focus on making sure that the grades are enough for their future-college. Well, in addition to all that senior year has to bring, 17-year-old Tupac Mosley has seemingly mastered it all while facing something that most students his age don’t have to focus on-being homeless.

Mosley has been on the interview circuit, talking to any and all news outlets; however, his overall message has remained the same-he refused to be a victim of his circumstance.

“When I heard that I got $3 million I was more than elated,” Mosley said in an interview with Fox 13.

During his graduation speech, the Tennessee teen encouraged the graduating class at Raleigh Egypt High School to,“Never let your current situation, whatever circumstances you’re going through, be a mountain that you can’t climb.

When Mosley’s father died, his world changed and chaos ensued. “After my father passed, we fell behind on bills and we ended up getting evicted from our home February 21 of this year,” he said. “So, we went to different homes so far and we were blessed to have For the Kingdom.”

For the Kingdom is a camp and retreat center where urban youth in Memphis are given the tools to help get their lives back on track. Mosley was provided a stable home environment, with the help of this organization, giving him the opportunity to finish high school with a 4.3 GPA.

“I knew that I had to make them proud,” Mosley said in reference to For the Kingdom. “I knew that their investment was worth it that and just show them that—yes, everything that you poured into me was worth $3 million and counting.”

So where is this amazing teen headed in the fall? Well, Mosley has to head to Tennessee State University where he will major in electrical engineering. Congratulations, Tupac. We know that this is not the last we will hear from you!

JORDIN SPARKS FELT 'LONELY' AFTER THE BIRTH OF HER SON

SERENA WILLIAMS, HUSBAND ALEXIS OHANIAN, AND THEIR DAUGHTER HAVE FUN AT DISNEYLAND PARIS

SERENA WILLIAMS, HUSBAND ALEXIS OHANIAN, AND THEIR DAUGHTER HAVE FUN AT DISNEYLAND PARIS