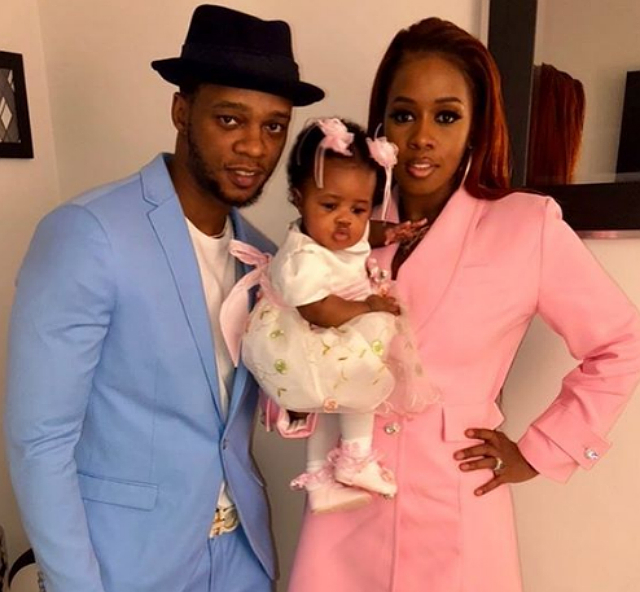 Remy Ma is convinced that she and husband Papoose’s baby girl, Reminisce MacKenzie Mackie, is truly a golden child. The celebrity mom recently shared a video clip of her daughter mimicking mom and dad in an effort to talk at just 4-months-old.

“I HAD to share this with y’all,” Remy Ma wrote online. “People think I be (sic) exaggerating when I say she’s really #TheGoldenChild,” the star mom shared. “Never in my life have I seen a 4-month-old do what she does. My baby says ‘hi.’ Look how she uses the same cadence as me,” the star mom doted.

“She also repeats the silly spitting thing her Dad taught her (her favorite thing to do),” Remy Ma continued. “And when she’s watching her show, Mickey Mouse Clubhouse, she be (sic) FOCUSED- hands folded and everything. KenzieGirl #ReminisceMacKenzie #MeetTheMackies #BlackLove #RemyMa #MommyAndDaddyMoments.”

Is it normal for babies to talk at just four-months-old? Well, yes and no. According to Baby Center, “Your child starts to babble, combining consonants and vowels (such as ‘baba’ or ‘yaya’) [at four or five months old].” Six months is usually when a child begins to understand and repeat words like Reminisce is presently doing at 4-months-old. So yes, Remy Ma and Papoose’s little one is ahead of her time.

Remy Ma and Papoose welcomed their daughter last December. The couple brought their daughter to The Real for Reminisce’s television debut back in February.

“She makes everything so peaceful,” Remy told The Real co-hosts and viewers. “Everything is just so calm. She really completed the whole circle,” the celebrity mom added.

Remy Ma went on to tell fans about the health scare that led to another trip to the hospital. “After I had her, my blood pressure was really high and my body … I was still dilated three days later,” Remy shared. “So they had to bring me in. I had three blood transfusions and it was just really, really crazy. I was scared because I was worried about her, but she was fine.”

Reminisce, a.k.a. The Golden Child, is Remy Ma and Papoose’s first child together. The celebrity couple parent five children in all.