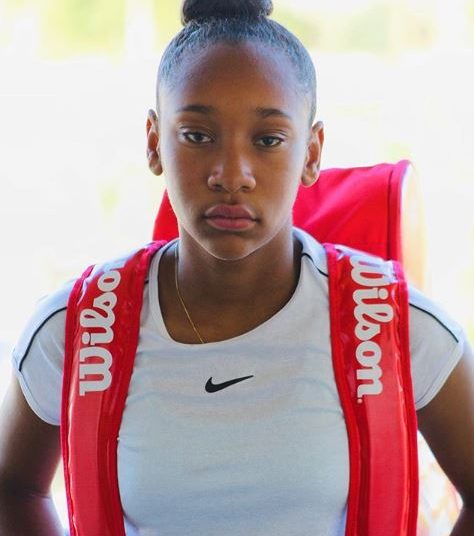 Reminiscent of other Compton Tennis prodigies—Serena and Venus Williams, thirteen-year-old Kalli Minor is positing herself as the next big thing in tennis from Compton.

Success or greatness come with a roller-coaster ride… anybody can apply the marathon concept to what they do.” – Nipsey Hussle 💙🏁 #themarathoncontinues #rallywithkalli

Already doing her part to get kids active and interested in tennis by way of a youth tennis clinic, “Rally with Kalli,” Minor is on a mission to expose kids in her hometown, ages 4-18, beginners to advanced, to the best trainers, physical and mental drills, yoga and leadership skills.

Minor first came on the scene when she as 9-years-old, attending a tournament to watch her idol, Serena Williams in action. To get Williams’ attention, Minor and her family “…made some signs and held it up and that’s where it all started,” the talented teenager said in an interview with nbclosangeles.com, and a friendship was born.

Fast-forward to today and Minor already has landed a partnership with Nike’s “Until We All Win” campaign in addition to spearheading her camp to make sure the children from her neighborhood are exposed to a sport that isn’t traditionally played.

“She’s doing things in this town and this state that has never been done before,” her coach Sean Bollettieri-Abdali said in the interview as well.

This is just the beginning for the young rising tennis star. She has already solidified her mark as a legend to many in her own community. We cannot wait to see what the future holds for Minor. We have a feeling that we will definitely be seeing her on the courts at Wimbledon.

Thirteen-year-old Aria Brooks is not only the newest cast member of Nickelodeon's hit television reboot,...

Storm Reid is many things-an amazing actress, a dedicated advocate, a true fashionista, and now,...

Quarantine isn't holding five-year-old rapping sensation Zaza back at all. The talented young rapper has...