DWYANE WADE AND SON ZAIRE WADE HAD AN ‘ALL-STAR’ WEEKEND

"I Was Looking Forward To Sharing This With My Son" 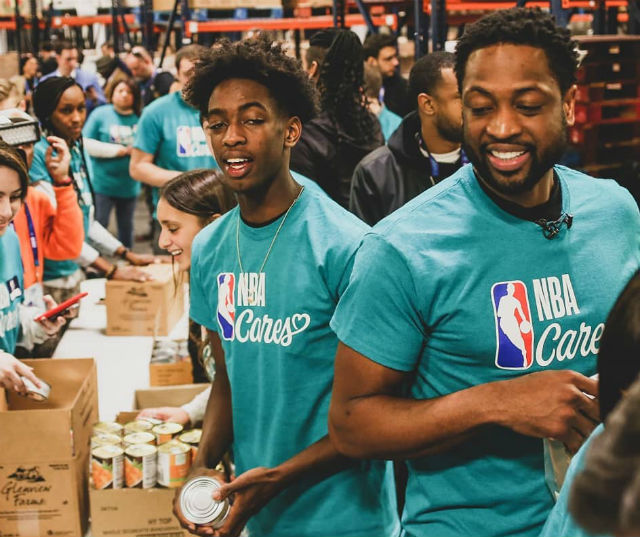 It was all about Dwyane Wade and his oldest son, Zaire Wade, who enjoyed time together during NBA All-Star weekend. The Miami Heat star told media that he was looking forward to the weekend because of the journey that he and his son have been on these past 17 years.

“I was looking forward to sharing this with my son,” Dwyane said at the All-Star Game press conference. “No disrespect to my other kids, to my wife, or my mom or anybody, but me and Zaire started this thing together,” the celebrity father explained.

“I was a 19-year-old father, and to be here at 37 and have my 17-year-old son be here, really understand what’s going on and be really close to his next level after high school. I want to give him this inspiration. I want to inspire him that, for real, anything is possible. I wanted him to be here to feel it, to see it.”

Zaire Wade has been living in the land of dreams and hard work. The teen is currently a highly sought-after high school basketball player with an athletic scholarship offer from the University of Nebraska.

Dwyane Wade has also been highly influential because of his role as a star basketball player and a father. In fact, the star dad wrote a book called A Father First, which tells the story of Dwyane’s evolution as a parent.

Dwyane Wade shared a few lessons that he has learned from parenting during a recent interview. “The one thing I tried to do when I got custody of my kids, out of everything, I tried to teach them about responsibility, respect, and routine,” the celebrity father shared. “The three R’s in my household is very important,” Wade concluded.

Will we see Zaire Wade play for the NBA in the near future? Maybe so, maybe no. We’ll have to keep watching the rising star to find out!