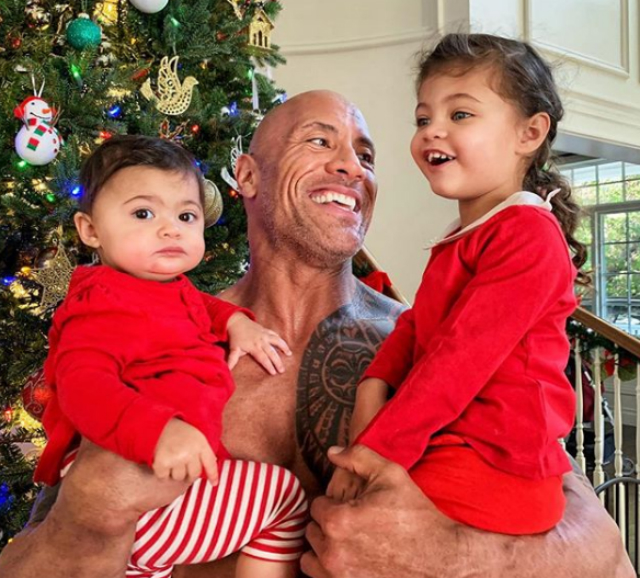 Dwayne “The Rock” Johnson is getting lots of love from his daughter, Jasmine Johnson, in a new video for social media. The Titan Games star recently shared an Instagram post that showed off his relationship with his “mini me.”

The Rock was en route to do a cover shoot when he spotted his daughter waiting for him. The celebrity father decided to take his little one in his arms and engage in a bit of “daddy and me” time. “Can you say, ‘I love you,'” Dwayne asked his daughter in the clip. Jasmine responded by saying, “I love you.” The star dad then went on to ask, “Can you say, ‘Mini me.” Jasmine repeated what her father said.

“She’s exactly what I needed to see before hoppin’ in my pick up to go and shoot the biggest and most meaningful magazine cover of my career,” Dwayne Johnson said of his daughter. “I’m 97% sure I bribed Jazzy with ice cream to say nice things about me when the camera is rolling,” the celebrity father mused. “Don’t judge. It’s how I roll,” Johnson further joked.

It was just a few weeks ago that Dwayne “The Rock” Johnson and his partner, Lauren Hashian, celebrated their oldest child’s birthday. Jasmine was full of excitement as she told the crowd that it was her birthday as they sang the birthday song.

The Rock reflected on his life as a dad this past holiday season. The celebrity father uploaded a picture of him holding his daughters, Jasmine and Tiana, while standing near the family’s Christmas tree.

“I ain’t gonna be able to hold ‘em like this forever, so you better believe I snatch these cookies and love ‘em up every moment I can,” Dwayne Johnson said. “Plus, I know there’s gonna come a day where in daddy’s arms is the last place they want to be,” he added.

Dwayne Johnson and Lauren Hashian have two kids together. The Rock also has an older daughter named Simone from a previous relationship. Stay tuned for more celebrity father news!

NIPSEY HUSSLE ATTENDS GRAMMYS WITH LAUREN LONDON AND HIS DAUGHTER