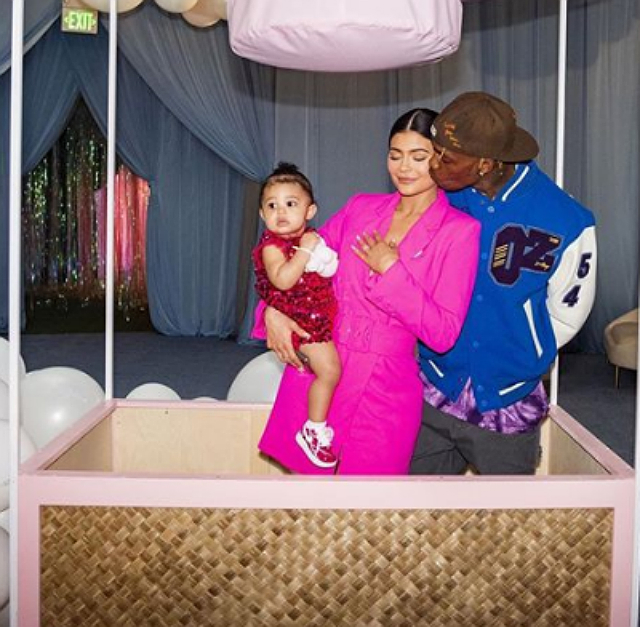 Kylie Jenner and fiance Travis Scott went to great lengths to make sure that their baby Stormi Webster had an extravagant birthday party this month. The celebrity parents gave their daughter two parties to enjoy. The first bash, given earlier this month, was one that highlighted rainbows. The party was a sort of emergency gathering after Kylie Jenner and Travis Scott’s initial plans of having a big bang were rained out. Stormi’s parents did not throw away their plans for a fabulous outdoor party but, rather, waited until the time was right to have the event.

This past weekend appeared to be the right time for Stormi Webster’s birthday party extraordinaire. The little one’s parents left no stone unturned as they had incredible decorations, tasty treats, and a spectacular guest list that made the circus-themed party complete. At the entrance to the event was a large balloon designed in the image of Stormi. The cookies were also crafted after the youngster. Stormi had loads of activities to engage in alongside her guests. Kylie and Travis gave their daughter a merry-go-round along with other carnival favorites. “How did I get so lucky to have such a sweet, smart, happy baby,” Kylie asked online. “I just couldn’t have dreamt you up, Storm,” Jenner gushed. “I wish you could stay this little forever and I could protect that contagious smile and laugh of yours.” “I know you won’t remember much about the first year of your life but I pray that you’ll never forget to keep sharing your joy and laughter with the world. my love grows for you a thousand miles a minute. every day with you is the best day of my life. happy birthday to my angel on earth.”