Alexa Was There, Too! 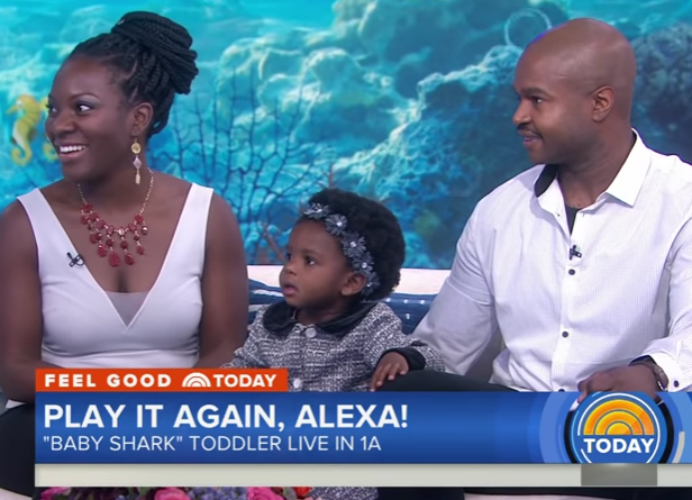 Two-year-old Zoe Turner captivated the hearts of nearly 300,000 YouTube users with her interaction with Amazon’s Alexa. The toddler was trying to convince the assistant to play ‘Baby Shark’ by Pinkfong but Alexa just wasn’t computing the command. Thankfully, Zoe’s mother was present to help her daughter accomplish what first seemed to be a daunting task. Zoe’s dance has since caught on like wildfire.

In fact, little Zoe Turner’s interaction with Alexa was the subject of the TODAY show on Tuesday (October 30). The toddler had everyone in the studio doing the ‘Baby Shark’ dance and was every bit shocked when Alexa had to end the song abruptly to update the system.

“It gets there sometimes,” Zoe’s father said when asked by one of the show’s co-hosts if ‘Baby Shark’ ever becomes all-encompassing. “I’m singing it at work. I’m singing it in the car.”

Perhaps one of the reasons why ‘Baby Shark’ has become a hit among kids and adults is due to its repetitive nature. The words to the song are pretty simple. There’s a baby shark, and then there’s a mama shark along with dad who’s also a shark.

“We took a fresh twist and re-created on a traditional singalong chant with our Pinkfong’s Baby Shark,” Pinkfong recently said of the hit song that has garnered more than two billion hits online. “In addition to the upbeat rhythms and fresh melody, Dvorak’s New World Symphony has been added to the beginning of the song to emphasize the tension before the shark family shows up.”

The attention to detail has worked to garner the attention of the masses. Little Zoe Turner is definitely a fan of the song!