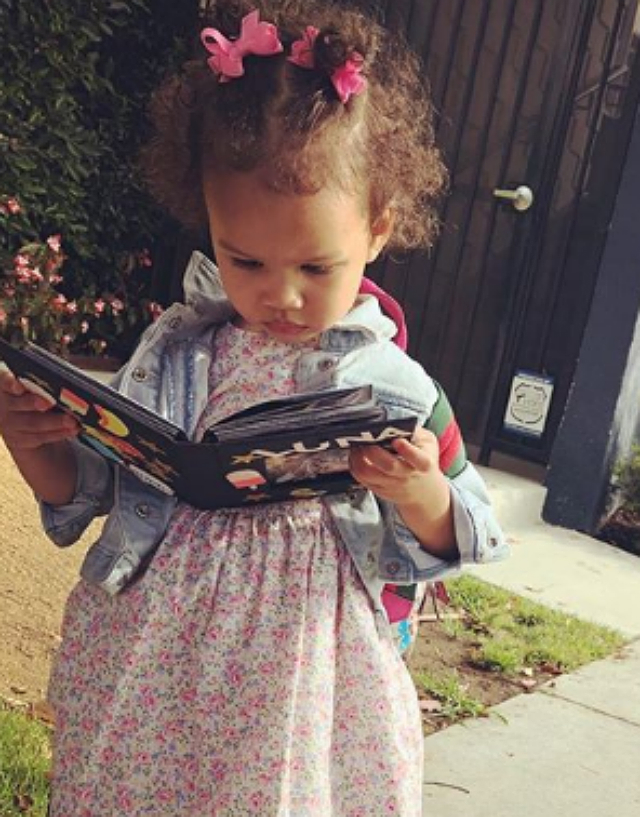 School days have begun for Luna Stephens. Chrissy Teigen took her daughter to school for the first time earlier this week, and neither mom nor the toddler was quite ready to begin the years of institutionalized education that lie ahead.

“First week of school,” Chrissy lamented. “They had us make a little family photo album she can look at when she’s sad or upset. She loves it. My heart,” Teigen wrote online. More than one million fans liked the photo of Luna looking at her precious memories book.

“Luna is beautiful,” one of Chrissy’s fans exclaimed. “Brace yourself,” another follower suggested. “She will go and not look back or she will say she’s learned everything this week so she didn’t need school. I thought so myself,” the fan mused. We could totally see Luna telling her mom that she’s over the notion of school after having gone for a week or two!

The toddler certainly enjoyed an eventful summer as Luna and the family spent many of their days in Bali. One photo of John Legend and Chrissy Teigen’s daughter was especially cute as it showed the toddler standing next to an alligator with no fear. Of course, the “animal” was an imitation. Calm down, you online parent patrol officers!

Chrissy Teigen recently gave insight into her life as a mother of two children. “That’s something I’m really curious about right now — how to deal with your first when you have a second coming along, especially when they’re so young,” she explained.

“Luckily, a lot of my best friends have two kids and they’re teaching me so much,” Chrissy continued. “I get really worried I’m not going to pay enough attention to Luna, but they’ve told me you actually start overcompensating and paying too much attention to your first. So there are a lot of these little things I always wonder about.”

YARA SHAHIDI COVERS 'CNET' MAGAZINE: 'WHAT I LOVE ABOUT THE INTERNET IS...'

YARA SHAHIDI COVERS 'CNET' MAGAZINE: 'WHAT I LOVE ABOUT THE INTERNET IS...'