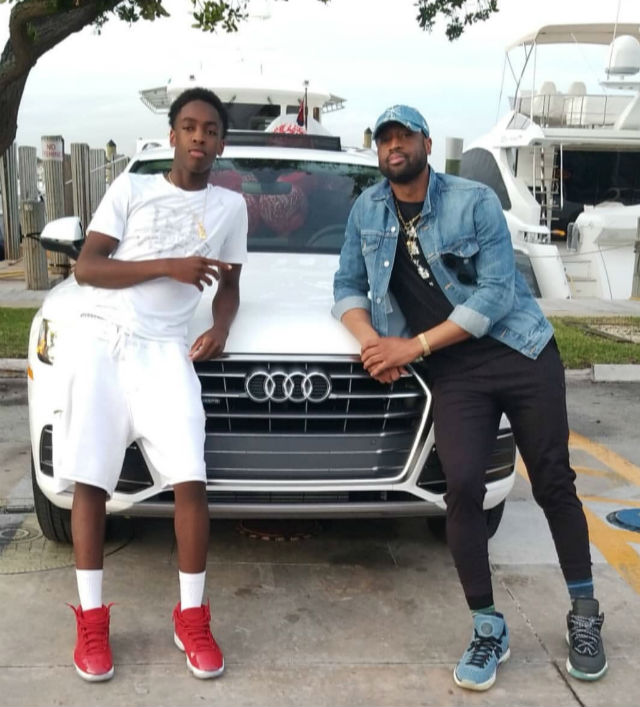 Would you believe that Zaire Wade is already getting offers from colleges because of his incredible skills on the basketball court? Dwyane Wade tells media about his son’s growing popularity in the sports arena.

“My older son, Zaire, plays [baskketball],” Dwyane reveals to Bloomberg. “My 11-year-old doesn’t. He doesn’t care about basketball at all.”

Zaire, however, cares about the game and hopes to possibly make a career out of it someday. “It’s a part of him,” Dwyane says of his oldest son’s passion for basketball. “I had him when I was at school at Marquette,” the celebrity father further explains.

“We didn’t have babysitters. We didn’t have any extra money, so I had to take him to the gym with me. I would be in the gym working—11, 12 at night—and I think it just kind of became a part of him. I was a young parent, just being in the gym, talking to myself, and he just was there. That’s a part of him, and it’s cool for me right now to kind of see him be in a position where college is the next thing that we’re focusing on. I hope his dreams come true just like mine.”

Dwyane Wade’s son may be edging closer to his dream of playing for the professionals in later years. Zaire is already garnering the attention of some university coaches. “The colleges are starting to see his talent and his ability, and he got his first couple of college calls the other day,” Dwyane reveals. “He decided to wait a couple of hours to tell me. I wanted to know right away. He put me on ice. I had to call him like, ‘Yo, what’s going on?’ But it’s cool, man.”

The G League is changing the way that players enter the NBA these days. There are talks of players joining the NBA fresh out of high school instead of attending college for one year before being drafted.

“I love the G League,” Dwyane Wade says. “It’s like a farm system for players,” he adds. “I think the NBA is now focused on it because there’s so many good players coming out of the G League. I wasn’t for the NBA changing the rule and making kids go to school, anyway.”

The celebrity father goes on to say, “College isn’t for everybody. Certain kids want to make money for themselves and for their families, and they have the ability to do that with the G League and playing overseas, etc. So I’m all for it. I feel like if a kid is talented enough, if an NBA franchise wants to take a chance and give him an opportunity to come in the league at 17, 18 years, like Kobe Bryant, LeBron James, Kevin Garnett—all great players—why not?”

Will Zaire be one of the trailblazers to go directly from high school to the NBA? We’ll just have to wait and see!