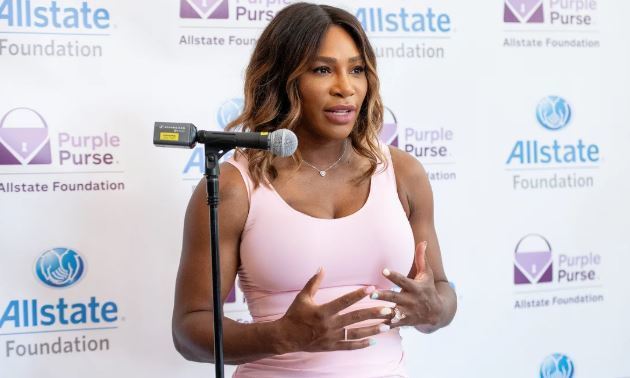 To help bring awareness to this serious problem, not only in the United States but world-wide, tennis star Serena Williams, is lending her voice to the cause, inspired by her daughter Olympia.

“These women probably can’t use their voice so it’s important for them to know that there are people out there that are using their voice and letting them know that there is a place, that we can do something about it,” Williams said at an event for the Allstate Foundation’s Purple Purse initiative national street art campaign.

“Having a daughter means that she’s one in four,” the superstar sited the statistics that hit close to home. “Hopefully those stats don’t go up by the time she’s dating and meeting people, but they can if you don’t make people aware of it.” Williams goes on to say, “[Domestic abuse] is a subject that people are not really comfortable talking about, but sometimes talking about the uncomfortable is what we have to do. We’re doing that now with Me Too, with Times Up, and I feel like we’re making those steps. We want to make this a movement.”

If you are a victim or no someone that is, don’t suffer in silence. Call the National Domestic Violence Hotline at 1-800-799-SAFE. They are there to support, be a resource, and give advice for your safety.

Yesterday in NYC, with my partners @allstatepurplepurse, I was proud to help kick off a national street art campaign to make financial abuse visible to all. Visit PurplePurse.com to learn how sharing the invisible can give victims a #SafeWayOut.

CARDI B CELEBRATES BABY SHOWER WITH FAMILY AND FRIENDS

CHANEL IMAN: 'I'M NOT AS COMFORTABLE WITH THE WHOLE IDEA OF LABOR'

CHANEL IMAN: 'I'M NOT AS COMFORTABLE WITH THE WHOLE IDEA OF LABOR'