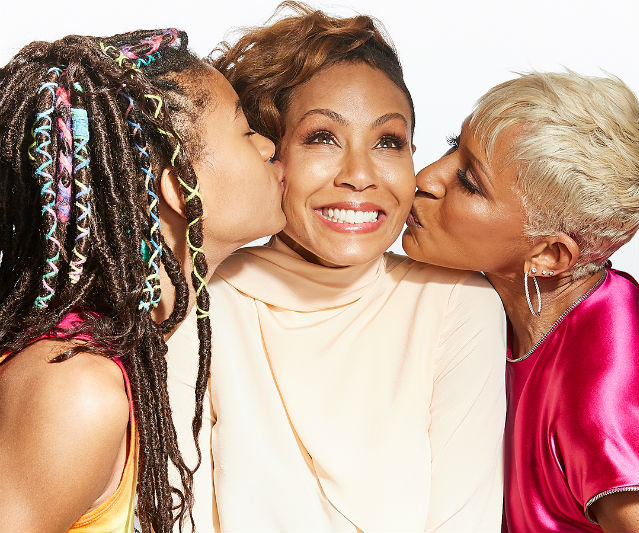 A mother’s intuition has a way of just knowing. Jada Pinkett-Smith delves into the subject of sex during her latest red table talk with her mom, Adrienne Banfield-Jones, and daughter, Willow Smith.

Now, for those wondering why Jada would include Willow in a conversation about sex, the celebrity mom explains why she didn’t shut her 17-year-old daughter out of the recent talk. “I did not want Willow to have shame of any kind,” Jada reveals. “You know, when you can talk to your mother who’s been through a whole lot in regards to sex … I wouldn’t say I’m a connoisseur, but I’m 47, so, enough said.”

A mother’s intuition is always right. Join @jadapinkettsmith, @willowsmith and @only1mrsn as they sit down to talk about sex this week at the Red Table.

When discussing the notion of losing one’s virginity, Jada tells Willow that she has an intuition that tells her when someone has begun exploring the world of sex. “I knew the night — the night — Jaden lost his virginity,” the celebrity mom shares. “I had a moment with Trey in the kitchen where I looked at him and I said, ‘You’ve had sex,'” Jada reveals. “And he ran into the bathroom … I was like, ‘You don’t have to be embarrassed.’ It was like, their innocence was gone.”

Although Willow feels comfortable having “the talk” of sex with both of her parents, she admits that the discussion becomes a bit more philosophical when carried out with her father. “Whenever I talk to Dad about it, it’s always an intellectual debate,” the teen shares. “It’s always like, ‘Speaking of the degradation of females and the past, how do you believe that trickles in to your experience?’ It’s very serious, but it’s not emotional. … And I always feel like the stuff of life is meant to be lived, not analyzed.”

You can catch Jada Pinkett-Smith, Willow Smith, and Adrienne Banfield-Jones every week online as they get real on their Red Table Talk show.

This week at The Table we're talking sex. Jada Pinkett Smith reveals everything from losing her virginity to embracing abstinence, and her addiction to sex toys. Willow Smith shares how she first learned about sex, and Adrienne Banfield Norris explains how her introduction to sex created shame in her life.

TAYE DIGGS SAYS HIS SON DOESN'T WANT HIM TO DATE

“SPIDER-MAN: INTO THE SPIDER-VERSE” IS COMING THIS CHRISTMAS TO THE BIG SCREEN!

“SPIDER-MAN: INTO THE SPIDER-VERSE” IS COMING THIS CHRISTMAS TO THE BIG SCREEN!