She Didn't Miss A Beat! 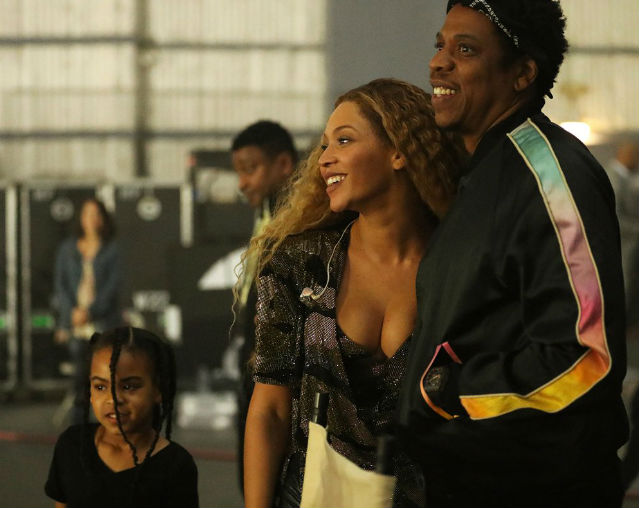 Beyonce’s performance at Coachella this past weekend was truly remarkable. Few will forget Bey’s dance-off with her younger sister, Solange Knowles, and the incredible performance that the ‘Crazy In Love’ singer rendered alongside Kelly Rowland and Michelle Williams. Destiny’s Child was in the house and so was Beyonce’s husband, Jay-Z. Blue, meanwhile, was taking it all in backstage.

The oldest child of Beyonce and Jay-Z was spotted and photographed with her parents before Bey’s set began on Sunday. Blue caught every moment of her mom’s performance on the big screen behind the scenes. Many social media fans who saw the picture of Blue with her parents were hoping that the youngster would bring her personality to the main stage.

“I thought Blue Ivy was going to make an appearance at Coachella,” one fan tweeted. “Maybe crowd surf or something.” Another of Beyonce’s followers wrote, “I was actually expecting Blue Ivy, Sir and Rumi to come up on stage earlier.”

Beyonce performing at Coachella and i bet Blue Ivy was fighting with Jay Z backstage. #BeyChella

Coachella 2018 may not have been Blue Ivy’s time to shine onstage, but we can definitely expect to see Beyonce and Jay-Z’s daughter in the spotlight in the future. The 6-year-old, after all, has appeared on her parents’ projects several times, with the most recent being in Jay-Z’s music video for ‘Family Feud.’

Blue has also surprised her father in the studio. It was just last year that the rapper shared his utter shock when his daughter sporadically rapped a song about glass ceilings and whatnot.

Beyonce performing at Coachella and i bet Blue Ivy was fighting with Jay Z backstage. #BeyChella

There is no question that Blue is talented with a personality that draws in the masses. Will we see her on the Coachella stage in coming years? Maybe so. For now, Stay tuned for more Jay-Z and Beyonce news!