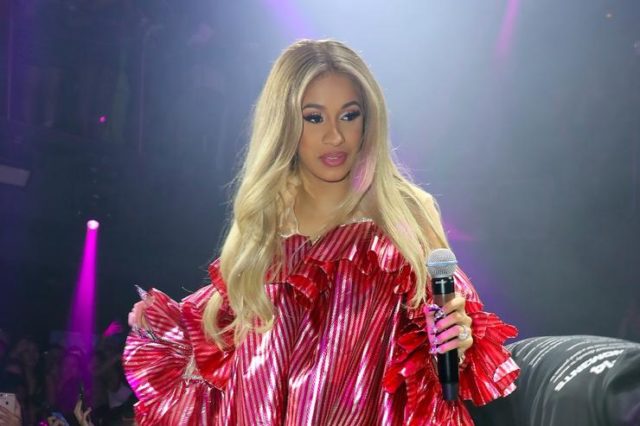 On April 7, Cardi B. confirmed she’s expecting while performing on Saturday Night Live. But before officially revealing the news, she managed to conceal her baby bump with clothes and accessories. Though the rapper hid her bump well, fans still suspected that she was expecting.

For months, the rapper denied that she was pregnant, but her choice in fashion said otherwise. Not only did the rap queen choose to wear over-sized dresses that made us all do a double take, but she also did some questionable things while out in public.

The rumors began on Feb. 14 when TMZ reported that Cardi’s team told club staffers in LA that she didn’t want to be in a “party atmosphere” as a result of her expectant status.

“Our sources say after Cardi performed, a venue staffer asked her team if they could escort her back to her VIP room, where alcohol was flowing. One of Cardi’s reps then said she didn’t want to be in a “party atmosphere” and preferred to stay in the area by the stage and drink Fiji water. The rep then told the staffer Cardi was 3 to 4 months pregnant,” TMZ reported.

Cardi is expected to give birth this summer. SCROLL DOWN TO SEE FIVE WAYS IN WHICH CARDI. B FUELED THOSE PREGNANCY RUMORE

Cardi B at E11EVEN in Miami

When She wore that Oversized Dress To The Iheart Radio Awards

Cardi B wins Best New Artist at the 2018 iHeartRadio Awards

Then There Was This Photo Taken in March

When Cardi and Offset Trolled With This Video

[Word on the street] is #Offset & #CardiB are expecting in July… ? Are they conforming it in this clip??