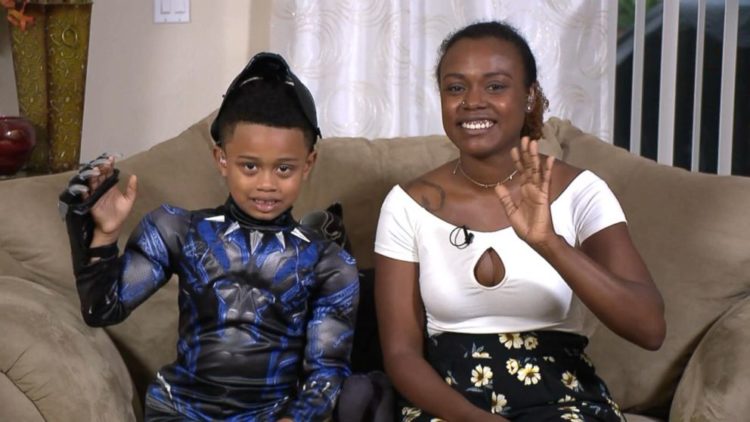 If you’ve been keeping up with viral kids on YouTube and other social media platforms, then you are probably familiar with Jordan Bascombe-Ralph. This 7-year-old took the digital world by storm a few days ago with his rendition of the #mbakuchallenge that was the perfect impersonation of the film’s stars.

“It was cool because someone from the movie commented on my video,” Jordan told the co-hosts of Good Morning America last week. The youngster’s mom, Brittni-Rae Bascombe, filled in with words that would not to her son, who was a bit shy, at the time. “It’s more than a movie, it’s a movement,” she told Good Morning America co-hosts and viewers.

This Black Panther movie has created a serious movement for our youth. My son loves all things Black Panther related. #MbakuChallenge pic.twitter.com/mSKEHy54pz

the #mbakuchallenge was initiated after Black Panther fans couldn’t get enough of M’Baku’s passionate monologue and subsequent challenge for the throne given to King T’Challa during the film. Dozens of social media fans have uploaded their renditions of the scene, but little Jordan’s delivery seems to stick with the public the most.

“I couldn’t have done it better myself,” Winston Duke (M’Baku, himself) told 7-year-old Jordan during the youngster’s Good Morning America segment. “You did everyone’s voice,” the actor told the little one. “So cool.” Even Michael B. Jordan gave props to this rising star!

Black Panther continues to be a trending film in both the box office and online despite its public debut being nearly two months old. Stay tuned for more viral kids news!

BRATZ CEO HOPES TO SAVE TOYS R US