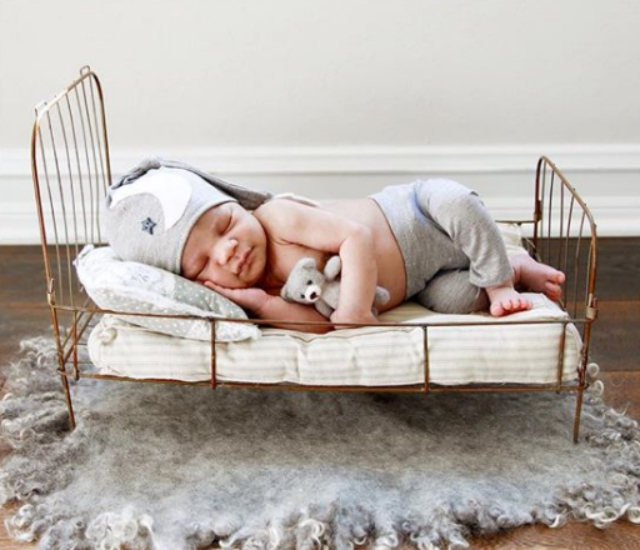 Kenzo Hart is killing us with cuteness! The newborn’s parents, Eniko and Kevin Hart, recently shared pictures from his first photo shoot, and we are completely captivated by this kid!

One candid that is particularly striking is Kenzo sleeping. The little one rests on his right hand while placed in a bed that is perfect for his size. “His first apartment,” one of Eniko’s followers mused. “He is absolutely beautiful,” another follower exclaimed.

Eniko was sure to thank the family’s photographer, Jessie Marrero, for her vision and ability to capture such a monumental time in Hart history. “Thank you for capturing these early moments with baby Zo,” Eniko told her photographer. “Your talent is truly amazing. You made it very difficult for me to decide which one to share… so this one will do!”

….. when I’m in my zone I seriously get lost in my baby world. I almost feel I can communicate with them… I fall in love with them and feel the same comfort in return…. love when parents allow me to take over and freely become The Baby Whisperer ? I just love what I do!! Newborns give me life!! BEHIND THE SCENES with adorable Baby Kenzo ? @kevinhart4real @enikonhart #BTS #BehindTheScenes #kevinhart #EnikoHart #newbornphotography #newbornphotographer #babyphotographer #babyphotography #Thebabywhisperer #jessiemarrerophotography #CaliforniaNewbornPhotographer

It was just a few days ago that Instagram fans got an up-close-and-personal look at baby Kenzo. The camera’s lens zeroed-in on the infant’s face, which was every bit precious.

“My genes are strong,” Kevin said proudly during a recent interview with ExtraTV about his latest gig in Jumanji: Welcome to the Jungle. The celebrity father was, of course, referencing his son’s appearance in saying that Kenzo takes after his father. Dwayne Johnson, the film’s star, also chimed in on Kenzo’s appeal saying, “Beautiful kid, but looks just like his mother, thank God.”

Watch the hilarious clip below and tell us who you think Kenzo favors the most!

GET A BEHIND-THE-SCENES LOOK AT CLINT EASTWOOD'S 'THE 15:17 TO PARIS'

GET A BEHIND-THE-SCENES LOOK AT CLINT EASTWOOD'S 'THE 15:17 TO PARIS'