HOW TIA MOWRY HID HER PREGNANCY THE SECOND TIME AROUND 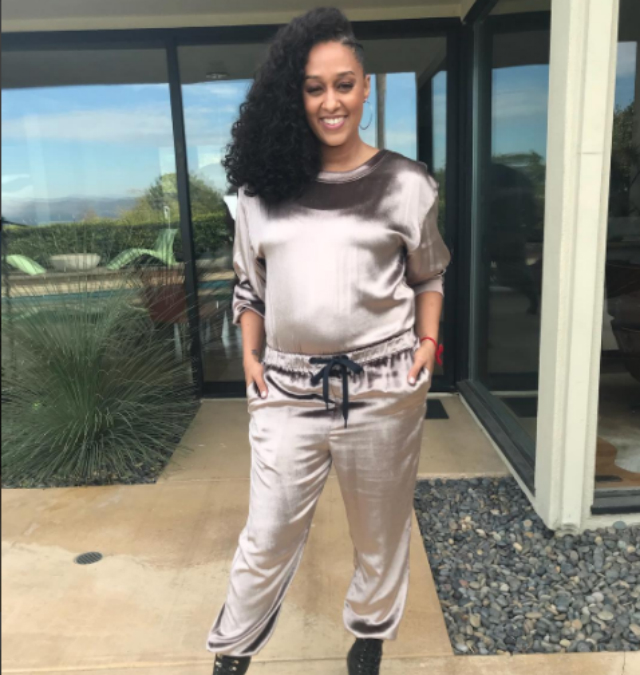 Just call her the queen of disguised pregnancies. Tia Mowry-Hardrict managed to hide her expectancy for months until deciding to reveal the news last week. Here’s how she did it.

Tia rocked dresses like the one above where the patterns work to disguise bulges. Diane Von Furstenberg is responsible for this October 7, 2017, creation.

Tia and her son, Cree, enjoyed a party on the pier earlier this month all while the expectant star rocked bulky apparel by Balenciaga. If you will notice, Tia’s outfit is bigger around the midsection but not overly bulky to the extent of her fans online suspecting anything out of the ordinary. The actress also wears a leather jacket, which further conceals her shape and bump.

Failure should be our teacher, not our undertaker. Failure is delay, not defeat. It is a temporary detour, not a dead end – Denis Waitley. Keep on! ??

We thought that Tia was just trying to look cute for the camera. In actuality, the actress was trying to hide her protruding stomach. The pose above, shared on November 4, 2017, is the perfect example of what happens when you give the camera the right angles. Tia leans back in the shot and bends one of her legs so that part of her stomach is blocked from the lens’ view. The actress subtly leans to one side so as to present a bit of a sassy look that further steals the attention away from her stomach. Even Tia’s hair serves a purpose as it hides the outline of her shape so that viewers cannot see her growing bump.

#happyhalloween from the soldiers!! Missing our Marine because he's working shooting his new tv show @theoathcrackle in PR! We ❤️ you @coryhardrict! See you soon! Reporting for duty SIR!

Tia was discreet when taking informal pics as well. The above post from Halloween shows the actress standing back from the camera in a linear position. The average person wouldn’t think expectancy, though some fans say they thought the star was pregnant based on their close observation of Tia’s costume fitting.

Tia hid her expectancy well when she was pregnant with Cree as well. The actress was working on the set of The Game at the time and her character, Melanie, was not pregnant. Mowry concealed her expectancy by wearing the right clothes and being mindful of her posture onset. All hail to the absolute queen of discretion!