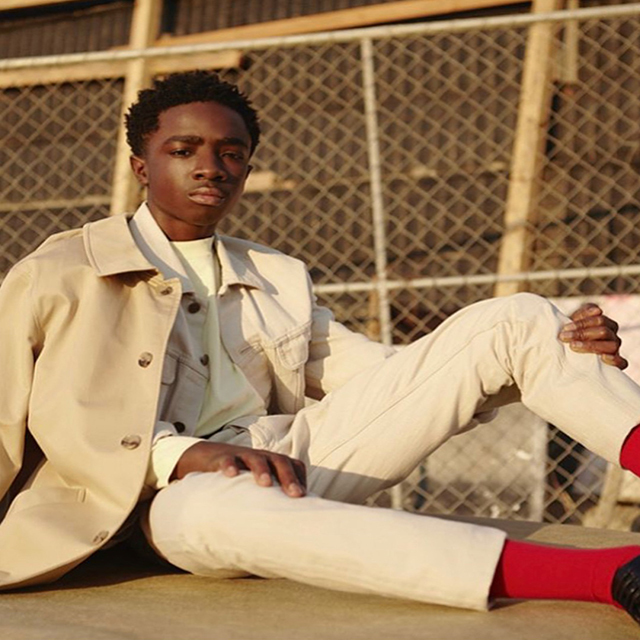 We’ve seen him dance with Jimmy Fallon, intrigue viewers world-wide on the hit Netflix series, Stranger Things, out-style a long list of who’s who on the red carpet and beyond, but exactly what do we really know about Caleb McLaughlin?

Well, the the super talented teen recently sat down with VMAN magazine to talk about his passions, goals, and what we can expect from season two of Stranger Things. So, here are 9 things to know about Caleb McLaughlin. After reading them, you will undoubtedly love the teen even more.

Your parents were always involved with performing and you started acting and dancing at a young age, but was there a moment when you realized that you really wanted to be an actor full-time? Or did you just always know?

Caleb: It wasn’t my dream to be an actor. I just wanted to be Simba on Broadway because it looked like so much fun. But after performing on Broadway for a few months and then landing my first TV role on Law And Order: SVU, I knew this is what I wanted to do!

What has been the most challenging part of having to adjust to fame with the massive response that Stranger Things has received?

Caleb: The most challenging part of my life is being more conscious of what I say or do because I’m a public figure now.

Stranger Things 2 is supposed to be even more intense for your character Caleb. What was your process like going into the second season?

Caleb: The process was really exciting and intense at the same time. The expectation for Season 2 was high so I was focused on giving a great performance.

You love video games and so many people love Stranger Things. What do you think it is about fantasy that attracts people, or what do video games do for you?

Caleb: Playing video games for me is an escape and it’s so much fun! It gives me a chance to experience a different world. It’s a fun to hang out with friends online.

Your social media is extremely uplifting and your advice for other young actors is to always remain positive. Why is it important to you to always remember to be positive in acting and in life?

Is it important to you to remember to still be a kid, even though you’re constantly working and on Netflix’s biggest show?

You’ve had some pretty great red carpet looks like at the Emmys. Where do you get your style inspiration?

Caleb: I’ve always been very particular about my personal style from a young age. My parents encouraged me to have my own sense of style. I would say Russell Westbrook is my style inspiration. He is fashion forward and he takes a lot of fashion risks which I like.

You’ve also worked on other projects on Broadway and The New Edition Story. What other kinds of opportunities do you hope to work on in the future?

Caleb: I would love to do a feature film and become part of the Marvel family.

You’ve done two projects set in the ‘80s now. What other time periods would you like to travel to through acting?

Caleb: I’m open to travel to any time period because it would give me a chance to expand my acting skills.

DID TOYA WRIGHT REVEAL THE NAME OF HER UNBORN CHILD?

DID TOYA WRIGHT REVEAL THE NAME OF HER UNBORN CHILD?