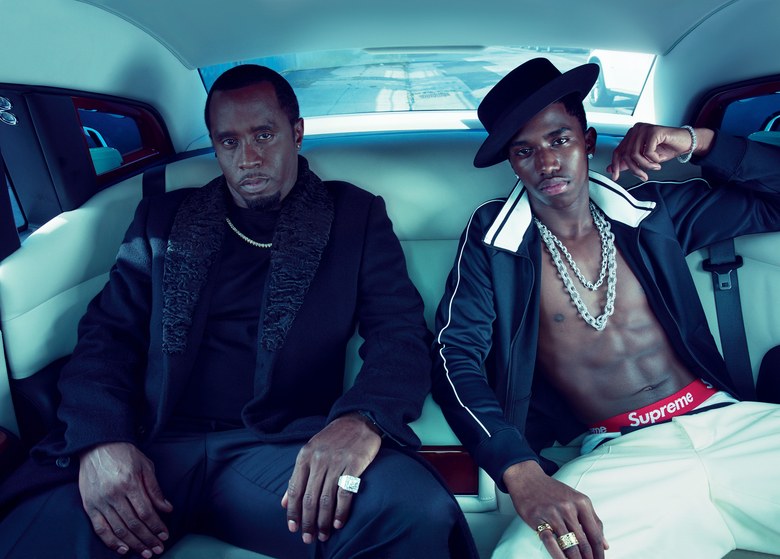 Sean wore a coat made by Alexander McQueen while Christian rocked wear by Berluti, Uniqlo, and Worth & Worth by Orlando Palacios during the shoot. Christian’s jewelry included earrings from Tiffany & Co., as well as two necklaces by David Yurman and Shay Fine Jewelry. Diddy was a bit less flashy than his son but, nevertheless, had jewelry worth noting. The Hip Hop mogul’s diamond ring definitely stole a piece of the shoot as its size and shine stood out from his dark-colored outfit. Jacob & Co. were responsible for such a beautiful creation.

“They can be very minimalistic and sophisticated,” Diddy says of his feelings towards jewelry, which cautions him to pursue a low-key appeal instead of going for a more lavish look. “Now it’s an accent instead of the whole story,” he adds.

Christian may agree with his father but still enjoys the bling. “I love the shine it gave my body and skin,” the young star reveals. “I really want a Rolex—fully iced.” We don’t blame you one bit, Christian!

Regardless of whether you agree with the younger or older Combs’ take on fashion, you must admit that the father and son are an unstoppable duo. What will Diddy and Christian come up with next? We’ll have to wait and see!

THE SHUMPERTS ARE SET TO STAR ON THEIR OWN REALITY SHOW