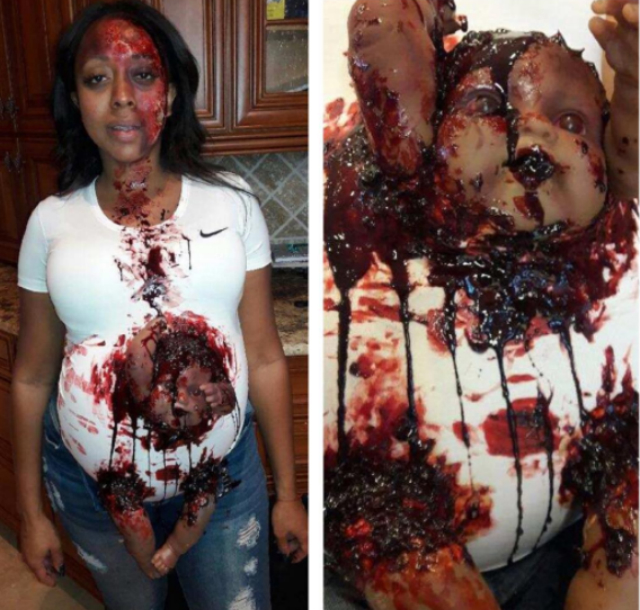 Is this a case of a Halloween costume gone wrong? Some say yes. Kijafa Vick tried a hand at a maternity look in honor of the scariness that is Halloween, but many critics say that she failed to get the right message across.

The celebrity mom portrayed herself as an injured pregnant woman whose unborn child was also seriously maimed in what could have been a car accident or anything else the imaginative mind could conjure up. Many fans had serious problems with Kijafa’s midsection, which featured a bloody and disfigured baby mainly because Kijafa is currently expecting a child with her husband, Mike Vick.

“Why would you portray something you don’t want to actually happen? Think about that. Would you do this? (Art imitates life!),” one critic said. Another scrutinizer took a more political approach saying, “But you are the same women who speak out against #Abortion.. or probably not. You probably don’t value a life. But this is exactly what Halloween is – Satan’s work! Wrong message! #HalloweenCostumeGoneWrong”

Some disagreed with the detractors and claimed that Kijafa was completely in the spirit of the holiday. “This is exactly what Halloween is about,” one person said in the expectant mom’s defense. Another social media commenter wrote, “I’ve seen way nastier costumes that people have applauded. I didn’t realize there was a line that people could cross on Halloween.”

BCK Asks: Is there a line that people should not cross on Halloween? Did Kijafa go too far?

TYRESE BREAKS DOWN OVER DAUGHTER, ANNOUNCES EXPECTANCY OF SECOND CHILD