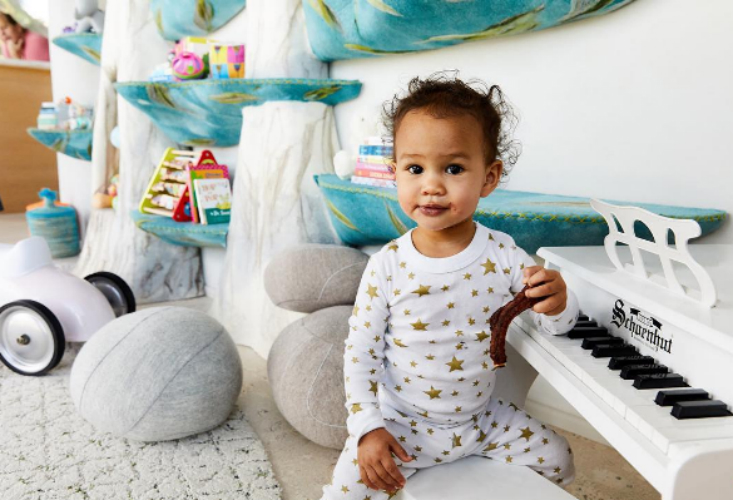 Luna Stephens is taking after her dad while helping her mom out as well. The daughter of John Legend and Chrissy Teigen was photographed while enjoying a rib at her mini piano in efforts to spread the word about her mom’s upcoming cookbook, Cravings 2.

The desire was real for Luna who unashamedly consumed the rib as pictures were taken. “At the piano, eating a rib,” John said of his little one. “It doesn’t get any better than this.” It sure doesn’t, John!

Chrissy also shared a shot of her daughter eating the entree. The celebrity mom told fans that the youngster was helping with preparations for Cravings 2. “You’re coming out with a new cookbook,” one fan asked in response to Chrissy’s post. “Such great news!” Another follower agreed and said, “I can’t wait.”

Chrissy’s first cookbook, Cravings amazed the food world. Some readers were shocked to learn that the model’s recipes extended beyond stereotypical diets in the fashion world and into what people eat every day.

hay place. a place for hay.

“I spent the past three years trying to prove to people that I love food, I love cooking,” Chrissy told PEOPLE days before Cravings came to bookstores. “It was always important to me that the people that I love and respected knew that I wasn’t trying to step on their toes,” she added. “Because there is nothing that I would hate more than a real, proper chef—who was trained and owns a restaurant and is working their a*s off—to ever have any kind of comparison to somebody [like me].”

She may not have stepped on the toes of culinary industry greats with her book, but Chrissy certainly made an impact with her publication. Cravings made the bestseller list shortly after its debut and continues to be a cookbook for ordinary people.

What do we have to look forward to in Cravings 2? Only Chrissy knows. Stay tuned to see how Luna helps her mom bring the vision of her second cookbook to life.

MEL B ENJOYS VACATION WITH THE KIDS IN HAWAII, OPENS UP ABOUT FAMILY LIFE IN REVEALING POST