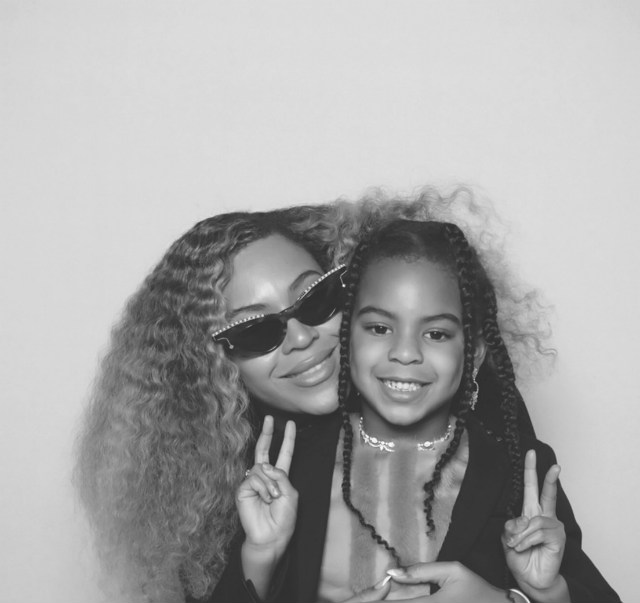 It’s wedding season for the Carters and Beyonce is sharing some of the cutest pictures of her oldest daughter, Blue Ivy Carter. The celebrity mom uploaded a picture and video clip of her with her 5-year-old at a friend’s marital ceremony this past weekend, and fans can’t get enough of the mother-daughter power team.

One candid was of Blue and Bey taking a moment to pose for the camera. Blue was all smiles in the photo as Bey bore a serious face while giving her daughter rabbit ears. “Blue Lookin like her daddy,” one BCK follower wrote. Another subscriber commented on Blue’s height saying, “I swear b4 she is 10 she will be the same high (sic) as her mom.” We agree!

Blue is definitely growing by leaps and bounds. Many may remember when Bey announced the impending birth of her and husband Jay-Z’s first child at the 2011 VMAs. The crowd went wild as Beyonce revealed her protruding stomach while cradling her bump.

The singer wasn’t as discreet when sharing news of her and Jay’s expectancy of twins earlier this year. Bey did keep the babies’ birth under wraps, however, so that she could have the chance to bond with little Rumi and Sir sans paparazzi intervention.

Beyonce told the press that motherhood has given her a connection like no other. “I feel more beautiful than I’ve ever felt because I’ve given birth,” she said after welcoming Blue Ivy in 2012. “I have never felt so connected, never felt like I had such a purpose on this earth,” the singer added.

CIARA AND KIM KARDASHIAN TAKE THEIR KIDS TO PAW PATROL LIVE! 'RACE TO THE RESCUE' SHOW

CIARA AND KIM KARDASHIAN TAKE THEIR KIDS TO PAW PATROL LIVE! 'RACE TO THE RESCUE' SHOW