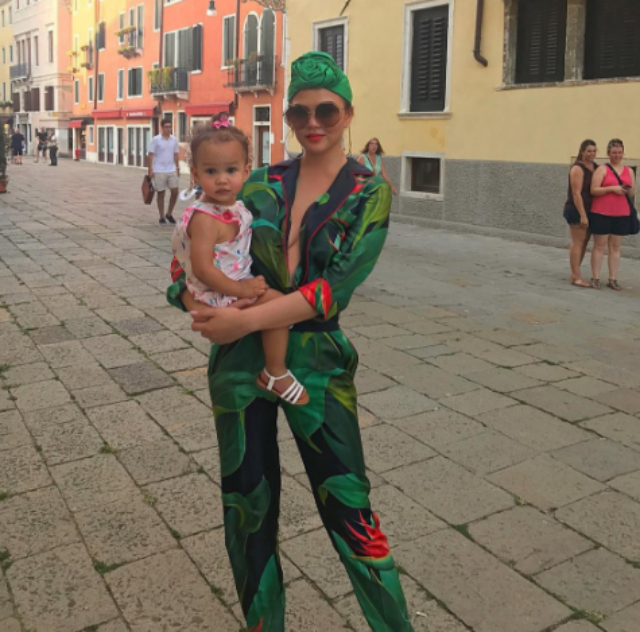 Chrissy Teigen’s latest wardrobe malfunction is because of her daughter. The celebrity mom tells PEOPLE that Luna is the reason for one of the family’s vacation photos in which Chrissy’s cleavage was revealed more than desired.

“If anyone sees a photo floating around of me with my entire cleavage hanging out, sitting in the middle of a square in Venice, it’s because Luna broke both of my buttons – ripped them off and threw them to the side,” Chrissy says. “I feel like I haven’t gotten the chance to explain. Kids don’t care,” she adds. “That’s why you have to laugh all of that stuff off because you never know what you’re getting into.”

This isn’t the first time that Chrissy Teigen has suffered a very public wardrobe malfunction. The celebrity mom had a nipple slip experience during one of her husband John Legend’s shows in New York in June. Chrissy took the stage with her hubby and was dancing when her black dress betrayed her. Teigen immediately covered up after seeing her nipple revealed. Unfortunately, a few photographers had already gotten shots of her wardrobe malfunction.

“Sorry,” Chrissy told the audience. Attendees joined the star model in taking everything in stride as they roared in celebration of Chrissy joining her husband onstage. Teigen later posed with a to-go bag from Hooters set in between her legs. Way to get over it, girl!

Chrissy Teigen recently told media that she would consider adopting children in coming years. “I would definitely adopt or have foster children,” she revealed. “But I loved being pregnant,” Teigen thought out loud. “Maybe I should be scared [of having PPD again], but I don’t know. It couldn’t be any worse than it was – could it?” Who knows?

For now, Chrissy Teigen and John Legend are the proud parents of one child. Luna Stephens celebrated her first birthday in April.