SEE IT HERE! LUNA STEPHENS’ REACTION TO HER FATHER’S ‘SESAME STREET’ GIG + NEW PICS FROM HER TRIP TO ITALY 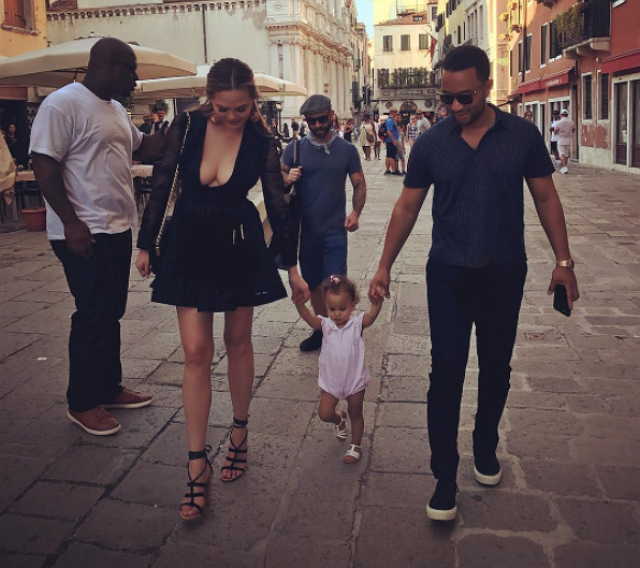 How was Luna Stephens’ reaction to her father’s most recent spot on Sesame Street? Too cute! Chrissy Teigen shared a video clip of her and husband John Legend’s daughter watching her father perform on the celebrated children’s series on Wednesday.

“When John first posted this video to Instagram, Luna had no idea what Sesame Street was,” Chrissy shared. “She was sick and couldn’t go to set when John was filming so all the characters made this video for her. This is her first time watching it and knowing how freaking epic it is.”

When John first posted this video to instagram, Luna had no idea what Sesame Street was. She was sick and couldn't go to set when John was filming so all the characters made this video for her. This is her first time watching it and knowing how freaking epic it is

Luna’s response is also epic as it is one of surprise and adoration. The little one acknowledges that “Dada Dada” is on the show shortly after waving at the screen. Luna even plays a bit of peek-a-boo with her dad. How cute!

Chrissy Teigen and John Legend’s daughter stole many hearts during the family’s recent trip to Italy. Luna was captured in several shots including one of the little one hanging with the birds. “Pigeon tried to steal the ice cream cone,” John shared along with a picture of his daughter staring at one of the animals.

Luna was also photographed while enjoying Cheeto Puffs and interacting with the locals. “Making friends in Piazza San Marco,” John told fans. “Baby girl is so cute and so is mom,” one of the singer’s subscribers wrote. “She is absolutely gorgeous,” another follower said of little Luna.

Chrissy Teigen told E! News how Luna has changed her and John’s life earlier this year. “We feel like she kind of just came into our life and she’s completely adapted to our lifestyle,” the celebrity mom shared. “We still do really fun things and get to travel and she’s just our little sidekick now. She’s our new plus one.”

Luna Stephens celebrated her first birthday in April. She is John Legend and Chrissy Teigen’s only child.

JOE BUDDEN AND CYN SANTANA ARE EXPECTING FIRST CHILD TOGETHER