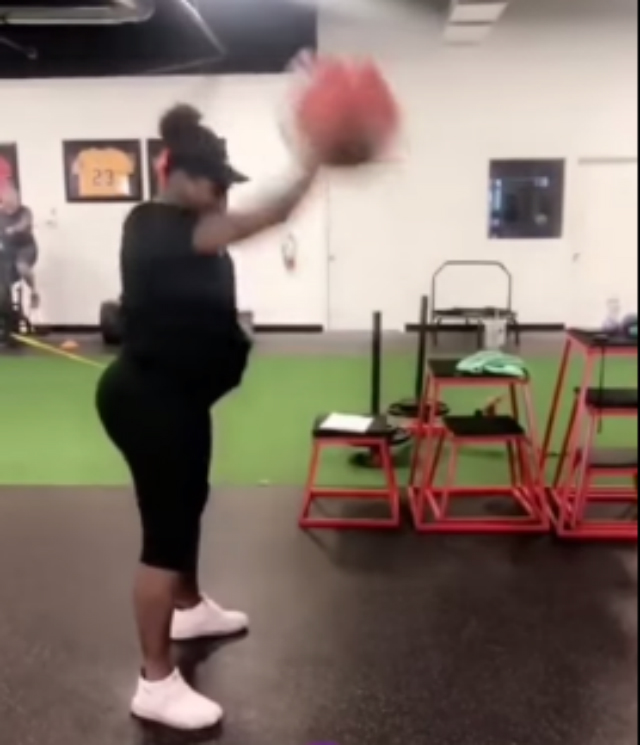 Serena Williams is heavily pregnant and hitting the gym. The expectant tennis star recently shared a snippet from her latest workout session with Snapchat fans.

Williams is going hard in the clip with a medicine ball. The pregnant star is also filmed while pushing sleds meant for football. Work it, girl!

It was just last week that Serena Williams wrote an open letter in which she was candid about her career in comparison to the pay gap that has plagued many women of color in the United States. “I am in the rare position to be financially successful beyond my imagination,” the star player expressed. “I had talent, I worked like crazy and I was lucky enough to break through. But today isn’t about me. It’s about the other 24 million black women in America. If I never picked up a tennis racket, I would be one of them; that is never lost on me.”

July 31 is Black Women's Equal Pay Day, which represents the number of days into 2017 a black woman must work to earn the same pay a white man made in 2016 — that's nearly 8 extra months! Black women are the cornerstone of our communities, they are phenomenal, and they deserve equal pay.

Serena went on to tell Fortune readers, “The first step in making a change is recognition. We need to push this issue to the front of conversations so that employers across the U.S. can truly understand that all male and female employees must be compensated equally. Not close. Not almost the same. Equally.”

'DETROIT' STARS JACOB LATIMORE AND ALGEE SMITH INTERVIEW EACH OTHER FOR RAWPAGES.COM