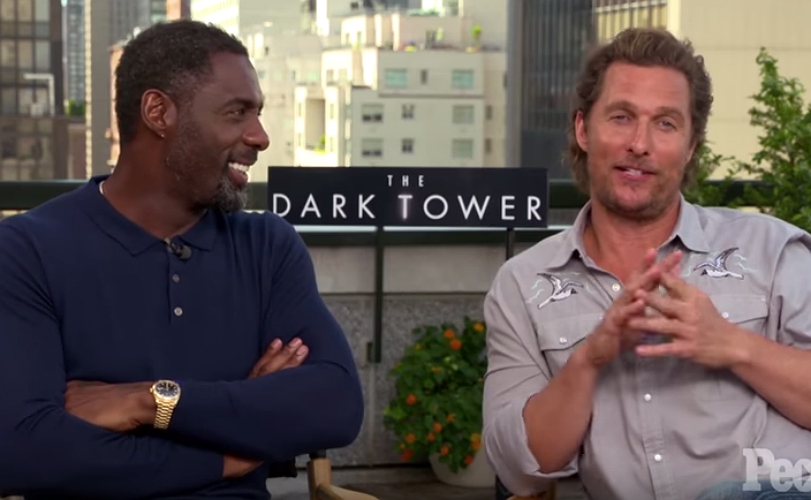 Idris Elba and Matthew McConaughey have work and their roles as dads in common. The Dark Tower stars tell PEOPLE Now about the many ways that their family impacts what they do onscreen.

“The person I’m most thankful for the things I’m getting to do — and we know it takes an army — is my wife,” Matthew says of his home life. “I don’t have to look in the rear-view mirror. Every day, she says, ‘Go, I got this.’ She drops things and goes with me, with the kids,” he adds.

Idris Elba also has a strong family balance with his son, Winston, and daughter, Isan, supporting him along the way. “They’re a part of me,” the actor tells PEOPLE Now. “When it’s a hard day and I think about bringing them up, I go, ‘Thank you for existing so I have a purpose.'”

Idris is thankful for his village as well, which includes his mom. “My mom is tirelessly my No. 1 fan,” he explains. “She used to say to me back in the day, ‘One day you’re going to be up there with Will Smith.’ And then I showed her a picture of me and Will Smith, and it blew her mind.”

Idris Elba and Matthew McConaughey star side-by-side in The Dark Tower. Elba’s character, The Gunslinger, is embroiled in an intense battle for humanity against the Man in Black (McConaughey) who represents everything that is dark and horrific. The Man in Black has plans to destroy the Dark Tower, which would mean the demise of two worlds. The Gunslinger won’t let that happen without a fight.

Catch The Dark Tower in theaters on Friday, August 4, 2017. Check out the film’s trailer below!