CHAD JOHNSON GETS A HAIRCUT TO REMEMBER FROM HIS TODDLER 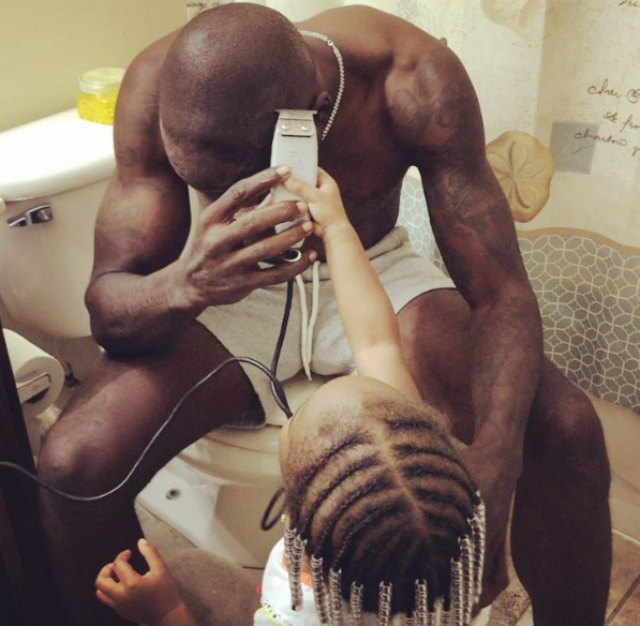 It’s the haircut that Chad “Ochocinco” Johnson won’t soon forget. The former NFL star’s youngest daughter, Kennedi, recently took a razor to her father’s head in efforts to give him a shave. The process didn’t go as smoothly as Chad had hoped and the celebrity dad captured it all on film for his fans to enjoy.

Kennedi started out well with her father’s hand guiding her along the way. Things went awry, however, near Chad’s hairline where the toddler began digging too deeply with the cutting tool and ultimately headed towards her father’s eyebrows with razor in hand.

Flight to Detroit at 6am & I needed a haircut, y'all know I'm too cheap to pay a barber, this is why you have kids, to get the remote, get the mail & now cut your hair. Baby Kennedi the barber ???

“Ouch,” Chad said in the video. Kennedi laughed right before her father said, “That’s not funny. That hurts.” One fan deemed little Kennedi as the “coldest barber in da city.” Another of Chad’s Instagram followers wrote, “She can cut my hair any day!”

Chad is taking full advantage of father-daughter moments while Kennedi is still a toddler. The celebrity father has shared several videos of him bonding with his 2-year-old with one recent Instagram post being one of him relaxing at home with Kennedi.

“We in Miami for a few hours,” Chad told his fans. “[I] had to come home and see my dawg (in reference to his daughter).” Kennedi was happy to see her dad but wanted no part of the limelight. “She wants no part of this today,” one fan noted.

Chad “Ochocinco” Johnson is the proud father of five children. Kennedi is the star athlete’s only child with his ex-girlfriend, Crystal Bates.