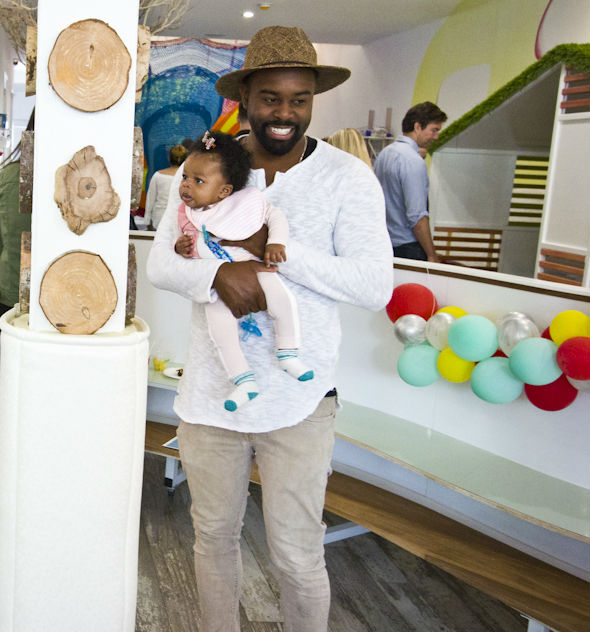 Hollywood dads are making their presence known this Father’s Day weekend. Actor Tobie Windham joined fellow actor David Stanbra and others at Mom.me’s Father’s Day event in Sherman Oaks earlier this week. The event was held at WeVillage and had lots of festivities for attendees to enjoy.

Tobie was one of the coolest dads at the event as he showed off his daughter to photographers while striking a pose underneath the Chanel logo. The actor also got in a selfie with the party’s host, Jerry O’Connell. “Look who’s Standing by me,” Tobie exclaimed. “Very nice event with this dude today!”

Many know Tobie Windham as Uncle Will on the television series, Walk the Prank. The show centers around four kids who pull off pranks on unsuspecting people. One would think that the adults in the picture would bring a bit of calm to the storm: not so. Uncle Will actually gives helping hands to the little ones when they can’t pull off tricks on their own.

“You can expect some of the craziest pranks you have ever seen,” Tobie says of Season two of the series. “This season we are treating our audience like they are much more mature,” he adds. “The pranks are bigger and scarier and move like short films. We trick a guy into thinking he has been contaminated by an unknown alien substance, so you get to see him freak out; a huge freak out, he was about to cry.”

In addition to seeing more pranks, fans will get more insight into the nature of the characters. “The content is more exciting and jaw dropping and you won’t want to miss,” Tobie says. “Even our targets were surprised by their own responses. We also have some amazing guest appearances by NFL players, ESPN anchors, WWE stars, and even the KC UNDERCOVER cast will join us.”

The second season of Walk the Prank premiered on April 1, 2017. Catch the series on Disney XD.