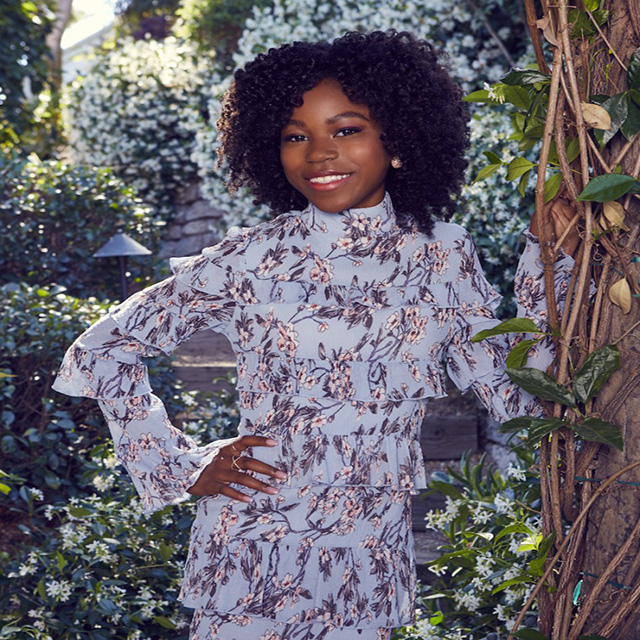 Riele Downs is probably one of the most humble, kind, and talented young actresses in Hollywood today. Hailing from Toronto, Canada, the young starlet has been acting since she was very young, many times, alongside her older sister. Although she loves her craft, there is another love that this rising star has kept somewhat hidden, until now-her love for fashion design.

“I was into fashion before I could remember,” the young Henry Danger star tells YSB Now in an interview as a part of their “Girls of Summer” feature. “I have this folder of drawings that’s literally from kindergarten. Eventually, I got this book from my teacher that had the outlines of the girls already in it so I could just draw on it.”

You might remember the sensational outfit that Downs wore to this year’s RDMA’s to accept her 2017 orange blimp, well, that red-carpet inspiration was a one-of-a-kind Downs original.

rocked my own original design at the #RDMA's saturday ?? i'll be posting the original sketch on @rielesdesigns soon! #radiodisney

“It was a difficult process, but I had fun,” she told YSB Now. “When I put it on, it was this spark of excitement, just knowing I created this and I was the one to design this.”

Downs loves design but says in the interview that labels should not define an individual. “What defines you is your personality, what’s in your heart, and how you treat others.”

This young lady is truly an inspiration and definitely unique to the world in which we live. We didn’t think that it was possible for us to love this rising star even more, but we were wrong. To read the entire interview with YSB Now, click here.