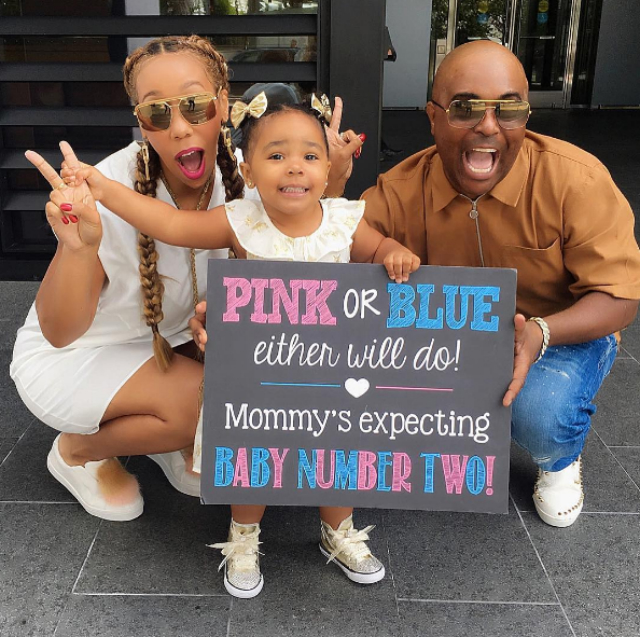 Alex Thomas and his wife, Brasie Patterson, are expecting a child. The couple shared the splendid news on Sunday.

Brasie and Alex were joined by their 2-year-old daughter, Halo, who helped them tell fans about the family’s expansion. “Pink or blue/Either will do,” read the sign that Halo was holding. “Mommy’s expecting baby number two” the note concluded. Halo was all smiles while holding her mom’s fingers, which were making the peace sign. Both Alex and Brasie had opened mouths while helping their daughter hold up the announcement sign.

Those who watched The Jamie Foxx Show may remember Alex joining the series near its end. Thomas was slated to finish out the show with his fellow cast members but stopped short of the final two episodes to go on Dr. Dre’s “Up in Smoke” tour.

“The Jamie Foxx Show was about to be done, and I knew that we weren’t coming back for any more years,” Alex said during an interview with VladTV. “We had two episodes left. Dr. Dre called and he was like, ‘Alex, we ’bout to do this tour. It’s about to be the biggest tour in Hip Hop history. I want to do something that ain’t never been done before. I’m like, ‘What’s that, Dre?'” Dre told Alex that he wanted him to serve as host on the “Up in Smoke” tour.

“I had to make a decision: either finish these last two episodes of this epic TV show or go out with the biggest producer/rapper in the history of this whole game and change my life from here on out.” Of course, Alex opted to go on tour and the rest, including Thomas’ comedic plot based on 50 Cent’s smash hit debut album, is history.

Alex Thomas and Brasie Patterson are expecting their little one to arrive in coming months. Stay tuned for more baby news!

THE CROMARTIES ARE EXPECTING THEIR SIXTH CHILD, MAKING ANTONIO DAD FOR THE 13TH TIME