DWAYNE JOHNSON GETS A BIRTHDAY CANDID WITH HIS BABY GIRL 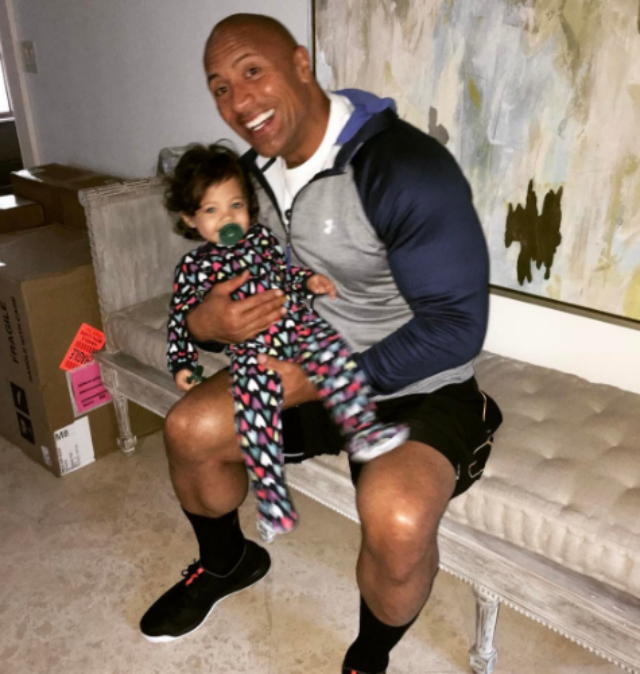 Some deem Dwayne Johnson, a.k.a. The Rock, as the most likable person alive. The Fate of the Furious actor’s recent Instagram photo of him hanging with his youngest daughter, Jasmine, may have caused him to earn even more points among already adoring fans.

The Rock was photographed while holding his little one, who was rocking a smile behind her pacifier, on his birthday. “Was puttin’ on my shoes to get ready to hit the gym before I go to work. This lil’ mama surprised me by runnin’ into my arms and yelling ‘Daaaahdeeeeee’ which in my mind clearly means, ‘Happy birthday daddy! You’re the coolest daddy on the planet and the sexiest man alive, now go crush your workout and keep stayin’ woke.'”

Nearly two million fans gave the photo a nod in less than 24 hours of Johnson posting. Thousands commented on the adorable moment between father and daughter. “He loves his kids,” one follower wrote. Another fan encouraged The Rock to “keep doing your thing.”

Dwayne Johnson has certainly prided himself on being the best dad that he can to his kids. It was just a few months ago that the actor shared little Jasmine’s experience with Santa Claus that inspired him to dress up as Pikachu. “She’s really unsure of who Santa is, right now,” The Rock shared with Jimmy Kimmel. “We did take her to go see Santa and sit on Santa’s lap, and I gotta tell you, it was awful. [She] hated it: bawled, crying, awful, hated it.”

Although he was not present when Jasmine had her not-so-pleasant encounter with Jolly Old Saint Nick, he learned of the occurrence when a photo that showed Jasmine crying was shared with him via text message. “Anytime you see your baby girl crying it’s like, aw man, it just breaks your heart,” he said. However, “The redemption is, I dressed up as Pikachu. That’s the redemption. She loves Pikachu.”