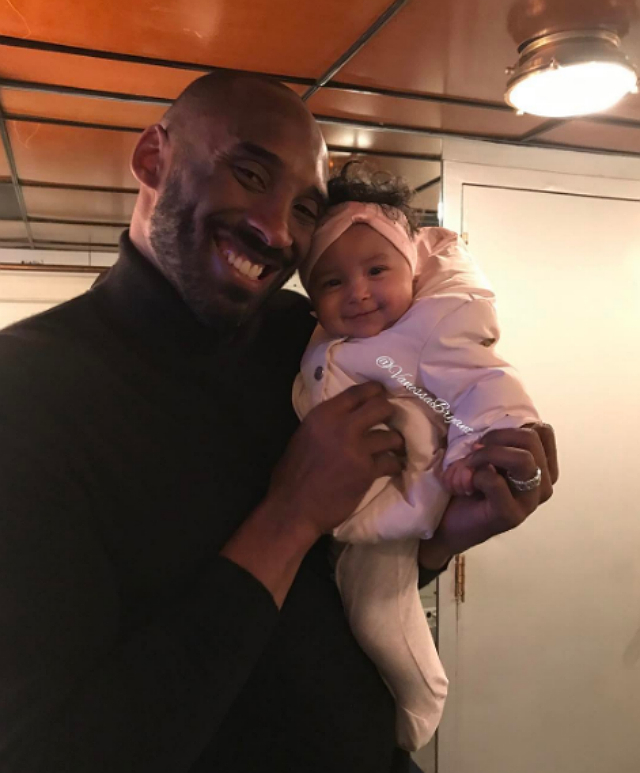 Here’s Bianka! Vanessa Bryant captured the cutest candid of her and husband Kobe Bryant’s youngest daughter hanging out with dad backstage at The Tonight Show.

Bianka gave her father a boost of confidence just before he went out to greet Jimmy Fallon and fans. “All Smiles,” Vanessa wrote. “Daddy and Bianka.”

Kobe Bryant gave quite the show during his segment on The Tonight Show earlier this week. The retired NBA star read a poem in honor of parenting and let Sports Illustrated Kid Reporter Max Bonnstetter pitch interview questions.

One of the main inquiries of Bonnstetter’s was Kobe’s feeling after becoming a well-paid superstar two decades ago. “I don’t get paid,” the young reporter said before Bryant responded with his answer to the question.

“It was awesome,” Kobe said of receiving a large paycheck straight out of high school. “There are worse problems to have,” he quipped. “It was pretty cool, yeah.”

One thing that hasn’t been so cool is the amount of attention, and lack thereof, that Kobe receives when dropping nuggets of basketball wisdom in his kids’ ears. “Both of my daughters, Natalia and Gianna, they started playing [basketball], and I’m like, ‘Maybe you should shoot like this a little bit.’ And they’re like, ‘I got this.’ I’m like, ‘Dude. Seriously?'”

Kobe and Vanessa Bryant have three kids together. Gianna celebrates her eleventh birthday next month, while Bianka crosses the 1-year-old threshold in December.