Home » NEWS » ZOE SALDANA ON ‘GUARDIANS’ FRANCHISE: ‘I AM PART OF SOMETHING THAT MY KIDS ARE GOING TO BE ABLE TO WATCH’

ZOE SALDANA ON ‘GUARDIANS’ FRANCHISE: ‘I AM PART OF SOMETHING THAT MY KIDS ARE GOING TO BE ABLE TO WATCH’ 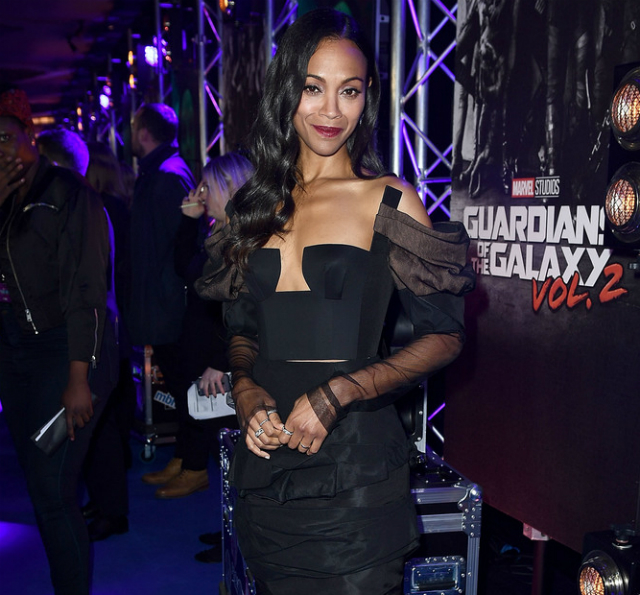 Guardians of the Galaxy Vol. 2 is on the horizon and Zoe Saldana is ready for her hard work to be placed on display.

“The highlight [of shooting this film] was knowing that I am part of something that my kids are going to be able to watch,” Zoe shares with Refinery29. “I love getting to be able to do movies that younger audiences enjoy,” she adds.

Taking a break for a play date ? #bts #gotgv2 #pressday

Zoe portrays the very serious Gamora in the Guardians of the Galaxy films. The actress tells media that maintaining the stern persona of her character is difficult while she is surrounded by so much humor onset. “There are a lot of takes that I tend to

“There are a lot of takes that I tend to ruin because I am laughing at something that somebody says because they are also improvising a lot — so it catches me off guard and I can’t keep a straight face,” Saldana says.

“I don’t know if I have a lot in common with Gamora,” the actress adds. “I am a little goofier — well I am just goofy, period. And I don’t think Gamora is at all. But one of the things I like most about her is the fact that I learn so much when I play her.”

Although learning to be grim onset is interesting, there’s nothing like relaxing with the family at home. Such is the reason why Zoe’s plans for Mother’s Day are simple. “I think just chilling and watching TV with all the kids on the couch with me and my husband. That would be the perfect Mother’s Day,” the star says.

Catch Guardians of the Galaxy Vol. 2 in theaters on May 5, 2017. Zoe Saldana and her husband, Marco Perego, have three kids together.