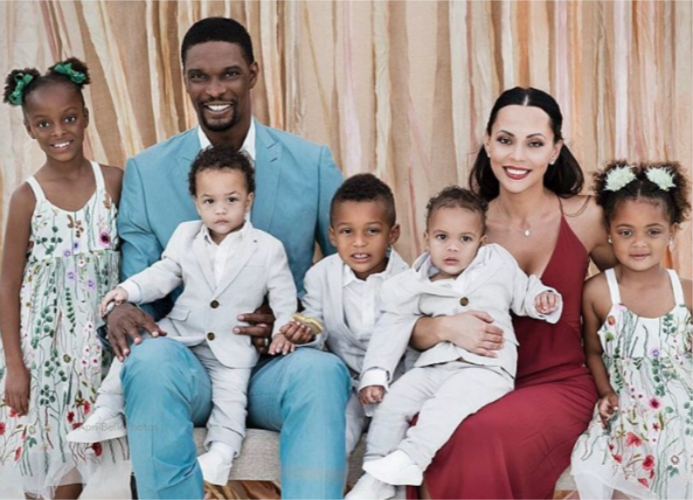 “My Hearts! My World! My own little galaxy,” Adrienne captioned underneath a picture of all members of the family smiling while wearing their best attire. “Beautiful family,” one fan said. “That’s goals,” another wrote.

Sometimes we just want to cuddle and laugh! #BoshFamily

It has been a while since Chris Bosh has taken to the basketball court to play the game that he loves. The Miami Heat star experienced health problems in 2015 that have kept him on the sidelines.

“At heart, I’m still an athlete and that is not how I want it to end,” Chris revealed during a recent appearance on Larry King Now. “I do [miss playing],” Bosh admitted. “But a part of me doesn’t. I’ve come to enjoy different aspects of life. There’s a lot of life out there. I mean only because as basketball players – we do that – that’s really it. But I’ve enjoying spending time with my kids. I’ve enjoyed spending time with my wife and just kind of relaxing and working on my mind and my soul.”

Mommy's boys ?????? They keep me surrounded in love and strength!❤️?? #BoshFamily

Some believe that Chris’ involuntary time away from the court is indicative of an early retirement. Regardless of whether or not Bosh returns to the game, he is guaranteed $52.1 million over the next two seasons. Chris and Adrienne Bosh have four children together. Chris Bosh has five kids in all.

AMANDLA STENBERG PREFERS PRONOUNS 'THEY' OR 'THEM' INSTEAD OF 'SHE'

AMANDLA STENBERG PREFERS PRONOUNS 'THEY' OR 'THEM' INSTEAD OF 'SHE'