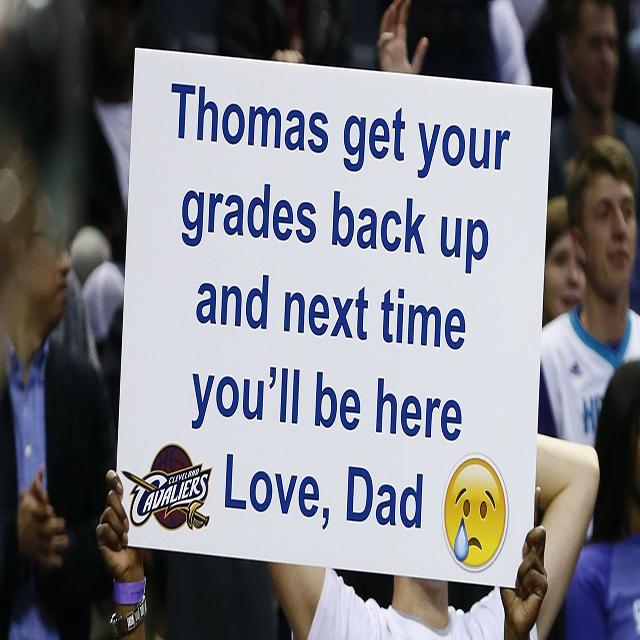 The dad who called his son out for bad grades, first at the Cleveland Cavaliers-Charlotte Hornets game and then at the Houston Rockets-Oklahoma City Thunder game, is speaking out about his messages to “Thomas”, making sure that he hears him “loud and clear”.

“My signs were dedicated to an audience of one! Just my son,” the father recently told Inside Edition in an interview. “I wanted to give attention to one person. Normally we will go to sporting events together. Due to his lack of effort in Mandarin and a couple of other courses, he couldn’t go. So, since he couldn’t come I wanted it to be message from the game.”

The unidentified father didn’t stop there. At the Houston-Oklahoma City game, he sent “Thomas” another message, making sure that he got the point.

Is this savage or good parenting? Many people have weighed in on both sides of the fence cheering on the dad for his encouragement to help “Thomas” get his grades up to people stating that the father is a “whack job” for embarrassing his son. Even the Charlotte Hornets mascot, Hugo The Hornet, got in on the action with his very own sign.

Weigh-in, we want to hear from you! Is this good parenting or has this dad taken things way too far?

DREAM KARDASHIAN IS AN INFANT OF MANY FACES