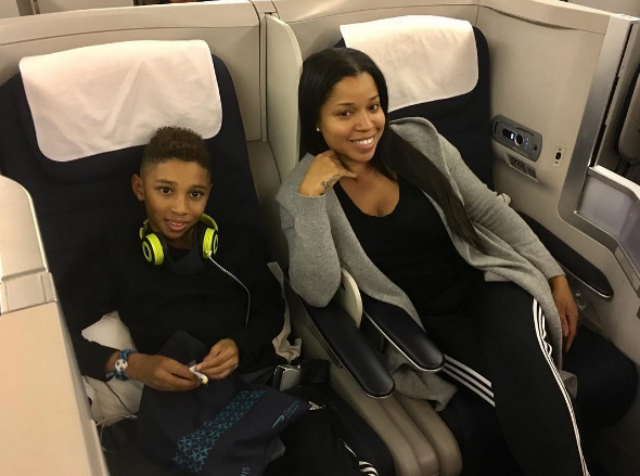 Who can say that their tenth birthday consisted of a party and tour of two popular cities in Spain? Kasseem “Dream” Dean, that’s who. The youngster entered the tween years in style with a fun bash and visits to Barcelona and Madrid.

“I’m going to show you a great time, my love,” Kasseem’s mom Mashonda Tifrere said before she and her son touched down in Spain. The celebrity mom later commented on her extravagant present to her little guy by telling fans that she and Kasseem had an “amazing first day in Madrid.”

Amazing first day in Madrid with @kasseemsdream his bday wish was to visit his favorite stadiums in Spain-so we started with @realmadrid ESTADIO SANTIAGO BERNABÉU My job is to make sure he has lasting memories of happiness. #kasseemsbig10

Kasseem also commented on his tour of Spain. “Thank you mom for taking me to my favorite teams stadium,” the youngster captioned underneath a picture in which he and Mashonda were hanging out at a sports arena in Barcelona. Kasseem was photographed while taking in the view outside of his hotel room as well. “Barcelona has always been one of my favorite places. and now it’s one of his,” proud mom Mashonda commented.

Barcelona has always been one of my favorite places. and now it's one of his 🙂 @kasseemsdream #kasseemsbig10 #travelher06

Tifrere recently told Necole that her journey to emotional wellness after parting ways with Kasseem’s father, Swizz Beatz, has been nothing short of enlightening. “As I reflect on my healing, I realize that my peace was never lost,” she told media. “There were times when I pushed it to the side and instead opted to focus on my ego and all of the things that didn’t serve my spirit well; but every time I found stillness, my peace would reappear.”

Thank you mom for taking me to my favorite teams stadium. I'll never forget this trip. #kasseemsbig10

Little Kasseem is Mashonda Tifrere’s only child with ex-husband Swizz Beatz. He was born in 2006.