AMBER ROSE GETS SLAMMED FOR TREATING SON TO MANI-PEDI 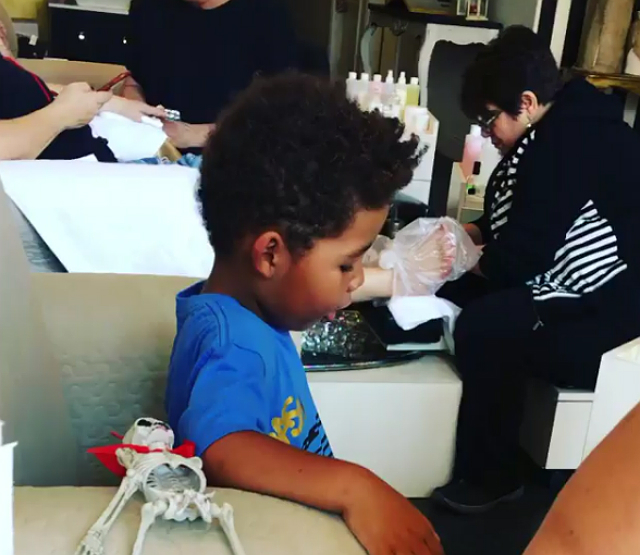 Here come the trolls! Amber Rose recently treated her son, Sebastian, to a manicure and some critics were not happy about the decision.

Rose recorded the cute moment and uploaded the footage to Instagram. “Hey, pumpkin, are you excited to get a pedicure and manicure,” she asked in the clip. Sebastian affirmed his excitement and told his mom that he wanted orange nail polish. “It’s gonna be so cool,” Amber said.

It only took a few hours for critics to slam Rose for her choice to treat Sebastian to a manicure. “Let us see the finishing product,” one person commented. “You have a little gay baby boy in the making.” How rude!

Amber was ready for the negative feedback, which is why she told fans to cultivate their kids’ self-expression and “let your children be great!”

Others also came to the celebrity mom’s defense. One fan wrote an extended argument in favor of Amber Rose. “I don’t understand why people are giving this woman so much hate for making her son happy,” the commenter wrote. “If you look at the video he’s excited and he looks happy and content just spending time with his mom, getting a mani -pedi. If he didn’t want it he could easily say, “Mama I don’t want this” and I’m sure she would understand.”

The amount of disdain that Amber and her ideals are shown is why the celebrity continues her quest for gender equality. Amber’s famed SlutWalk has garnered support from many in Hollywood who, like Rose, believe that a woman’s dignity is her right and not a privilege.

“I decided to have this SlutWalk for women that have been through s***,” the star said during her feminist demonstration last year. “The first time I ever got slut-shamed I was 14 years old,” Amber said. The star recalled the scene and gave fans a bit of detail as to how the boy that she was kissing as part of a juvenile game called “Seven Minutes in Heaven” humiliated her.

“I was in [the closet] with some boy,” Amber explained. “We were kissing and he was like ‘Hey, you know, you should get down on your knees.’ And I said, ‘Why, why would I do that?’ I’m 14 I don’t know what the hell get down on your knees means. He asked me again, and I said ‘OK,’ and I got down on my knees. And he opened the door.” All of her peers saw her in the awkward position and deemed her a promiscuous girl.

“I was extremely slut-shamed by the entire school,” Rose shared. “I wanted to change schools. I felt like my life was over. It was very difficult for me.”

Now, as an influential star, Amber aims to change perspectives. “I want to be the strong person that you guys can look up to,” she said at last year’s rally.

Amber Rose is the proud mother of one child. Sebastian is her son with ex-husband Wiz Khalifa.

THE MELISIZWE BROTHERS EMBARK ON A MUSICAL JOURNEY