by Tiffany Silva
in Bump Watch
2 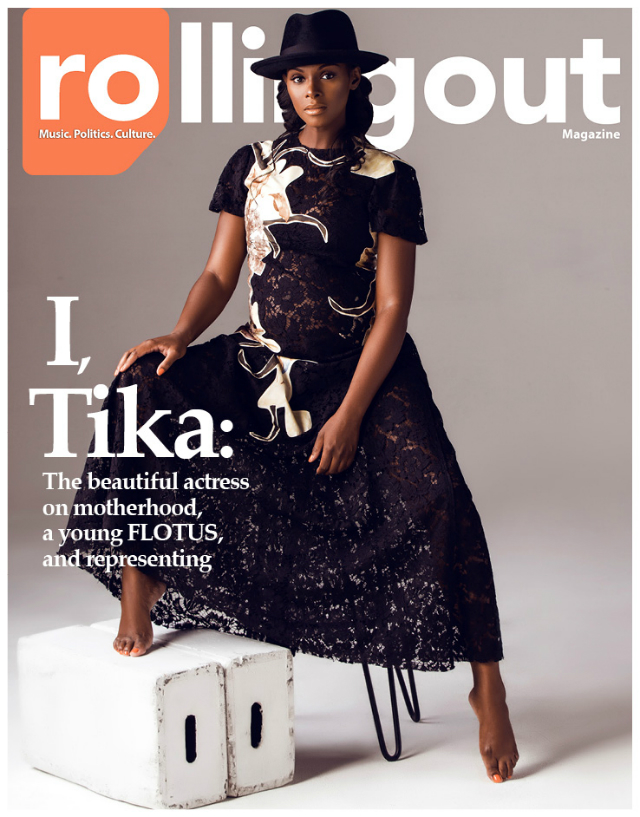 Two months away from giving birth to her first daughter, Tika Sumpter sits down with Rolling Out Magazine to talk about portraying the young FLOTS in Southside With You and much more.

“I was given the synopsis to this movie. It wasn’t written. The script wasn’t written, but I loved the perspective it came from and I loved, first of all, that we’ve never seen them on screen at 25, 28 years old and the origin story of their relationship. So when the screenwriter wrote the movie, I was blown away by it and said, ‘We have to get this made,’” Sumpter explained in response to a young lady’s question about her involvement during a screening of the film in Atlanta. Sumpter not only played Michelle Robinson, the first lady’s maiden name, but she was also a producer of the film.

“It’s actually inspiring. I hope one day my daughter looks at this and says, ‘Mommy you promoted this film with me inside of you and you were as strong as the person you played,’” Sumpter comments to Rolling Out Magazine.

Sumpter is no stranger to both the big and small screens. Her roles have included: Layla Williamson in the mid-2000s on “One Life to Live”, Raina Thorpe on “Gossip Girl”, Jenna Rice on “The Game”, Emma in the Sparkle remake, Angela Payton in Ride Along, Yvonne Fair in Get on Up, Lucille in “Bessie” and most recently, Candace Young on OWN’s, “The Haves and the Have Nots”.  “I just wanted it,” the actress recalls referring to acting. “I wanted it really bad. It made me happy to act. It made me happy to be in another place and to do the arts and what it does for other people. It makes you feel something. It makes other people feel something. So I really wanted to be a part of that.”

When talking about her next biggest role in life, Sumpter knows that motherhood is perhaps the most important one of all.  As she prepares herself for her daughter’s birth, she thinks about the images her daughter will see in the world.  “I just want her to see images of strength out there and of women who are doing something with themselves. I want to be able to dictate something about the images that my daughter will see and also [for her to] look up to me as a great mom and a great woman that she would want to one day hopefully be like.”

When asked who does she credit for her strength and self-confidence, Sumpter definitely mentions her own mother. Knowing that women with her complexion have struggled, Sumpter’s mother never made an issue about the hue of her children’s skin. Instead, Sumpter recalls that she filled them with a foundation of pride and self-love.

“When I do hear of colorism, I try to help women to see that their beauty is inside themselves,” she continues. “That’s why it’s important for images to be out there that are positive. If I don’t see an image of myself in a magazine constantly, I don’t buy it. I don’t feed into what somebody else thinks is beautiful.”