SAINT WEST’S GIGGLES WILL PUT A SMILE ON YOUR FACE 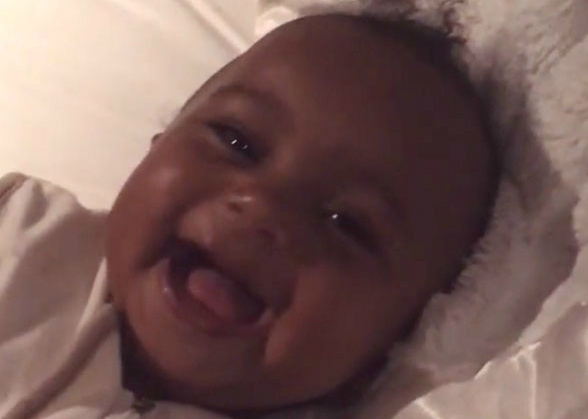 Put on a happy face! Kim Kardashian recently shared footage of her son, Saint, chuckling and the sight is heavenly.

The laughter began after a stuffed animal was rubbed against little Saint’s face. The youngster could not contain his excitement as he rolled around while giggling.

Up until this point, Kim Kardashian has been hesitant to share videos of her son. “Truly, I was not posting about my son because I wanted him to be able to go to the park every single day like a normal human being and nobody knows who he is,” she revealed during a recent interview. “He’s eight months old now, and people thought he didn’t exist,” Kim added.

Although some criticize Kim for her posts on Instagram, the celebrity mom doesn’t care about the scrutiny. “I have my family. I have my kids. I don’t need to sit at home and I don’t really have the extra time to look at comments,” she told press. “I know that the hate is out there. When I post something, whether it’s a nude selfie or something, I don’t post it just to get a reaction. I post it because I like the photo.”

Saint West is Kim Kardashian and Kanye West’s youngest child. The couple also has a daughter named North who celebrated her third birthday in June.

THE OBAMAS ARE VACATIONING ON MARTHA'S VINEYARD