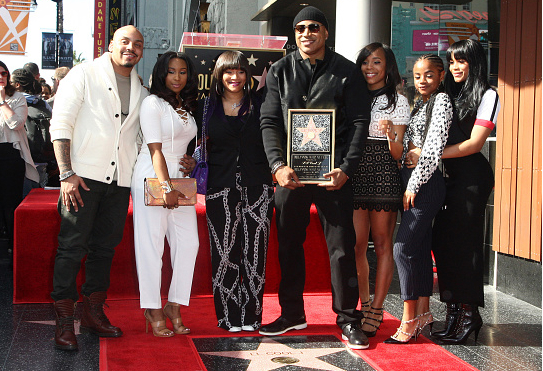 Hip-hop artist LL Cool J was honored wtih a star on The Hollywood Walk Of Fame on January 21, 2016 in Hollywood, California. On hand to support the rapper at the ceremony were  his Simone and their four kids.

Born James Todd Smith on Jan. 14, 1968, in Bay Shore, New York on Long Island and raised in the Hollis neighborhood of Queens, he adopted a stage name that stands for Ladies Love Cool James.

LL Cool J began his career in 1984 with Def Jam Records. He is tied for third for most Billboard chart debuts by a rapper. All but one of his 14 albums have reached Billboard’s rhythm and blues/hip-hop chart Top 10. Besides hosting the awards show, he has also won Grammys for best rap solo performance in 1991 for “Mama Said Knock You Out” and 1996 for “Hey Lover.”

LL Cool J, who has played NCIS Special Agent Sam Hanna on “NCIS: Los Angeles” since 2009, has also starred in films including “Deep Blue Sea” and “Any Given Sunday.”(Source)

ZENDAYA IS THE NEW FACE OF COVER GIRL