SHERRI SAUM: ‘I WILL NEVER CUT MY KIDS’ HAIR’ 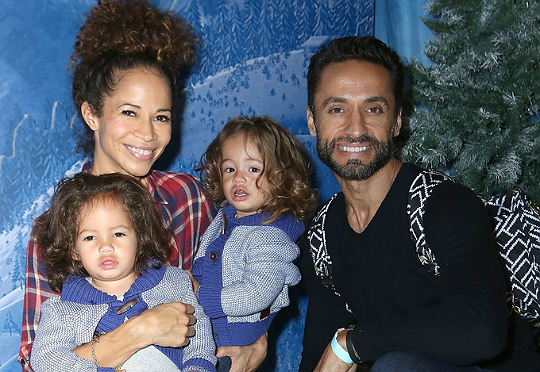 Sherri Saum and the family celebrated the winter season by attending the ‘Frozen On Ice’ premiere in Los Angeles last week. The actress along with her husband, Kamar de los Reyes, and twin sons enjoyed the showing and gave photographers their undivided attention while on the red carpet.

Many have criticized Sherri for refusing to cut John and Michael’s hair. Despite such scrutiny, Saum tells media that she is “not going to ever” cut her sons’ locks. “I just don’t see the point unless they have a job interview coming up, then I might consider it. But even then, I might try to fake a pin under a bun or something.”

Thousands of moms are frantically preparing for Christmas, but not Sherri. “We’re going to take it as it comes,” shares the star. “I’m big on not forcing things and not trying to be the perfect Christmas mom. I’m just going to be like, ‘Let’s get through the day and see if we can have a candy cane and call it success.'”

Sherri and Kamar de los Reyes welcomed their twins last year. Michael and John celebrated their first birthdays in May.

THE CANNON TWINS THINK MOM IS AN 'ANGEL, A GODDESS'

THE CANNON TWINS THINK MOM IS AN 'ANGEL, A GODDESS'