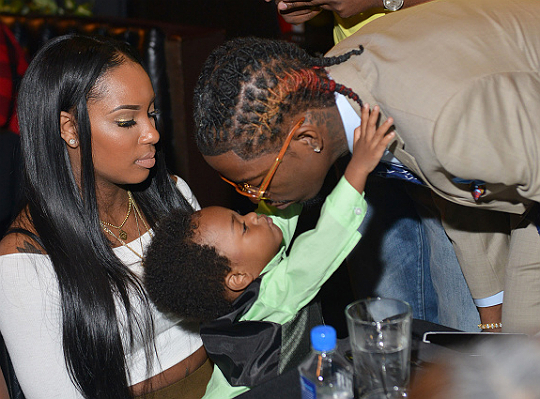 Dequantes Lamar, a.k.a Rich Homie Quan, was honored by BMI earlier this week in Atlanta, Georgia. The rapper had his son, Royal, and Amber Rella, the little one’s mother, with him to celebrate. The rapper was surrounded by fellow celebrities local to Atlanta including singer Bobby V.

It was just a few weeks ago that Rich publicly apologized for placing his son in harm’s way. The Instagram post came after video footage of the rapper smoking while holding his son went viral. “I would like to apologize to my son,(Royal) my fans and all the parents around the world,” said Rich. “By no means would I do anything to hurt my son or any kid in the world.”

The artist further explained that he should have kicked his smoking habit the moment his son was born. “After looking back on it I realize my error and I am sorry for my actions.”

Quan thanked his fans for the “pedestal” that they allowed him to stand on, and told them that he didn’t take the opportunity to be a role model lightly, before ending the note. He added, “I will continue to strive to be the best parent I can be.”

Royal is Rich’s only son with Amber Rella.