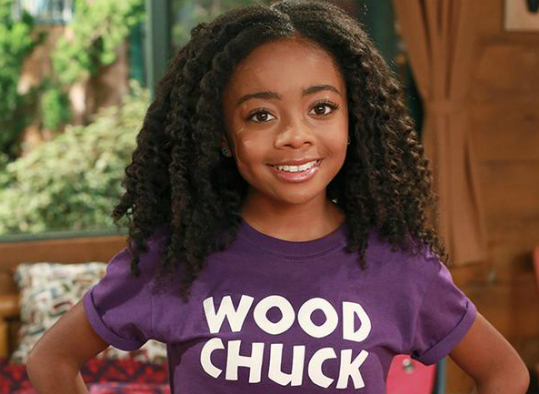 BUNK’D follows siblings Emma, Ravi and Zuri Ross as they embark on their summer at Camp Kikiwaka, a rustic summer camp in Maine where their parents met as teenagers.  Blackcelebkids.com recently sat down with Skai to talk about her revamped role as Zuri Ross and much more.  Check out the interview below!

“BUNK’D is a spin-off of Jessie. I play the same character, Zuri Ross, who we all know is sassy and she knows what she wants, and she’s very outgoing. … So it’s kind of like we go from this huge penthouse to this not so nice camp in Maine. And it’s kind of fun watching Zuri adjust to the different lifestyle.”

Similarities and differences between Zuri and Skai.

The last day on the set of Jessie and finding out about BUNK’D.

“It was really sad, the last day of Jessie because we didn’t know at first we were getting the spin-off. So we thought we weren’t going to work together again. Maybe we would, of course, hang out with each other but not like on a set 24/7. So we were definitely crying about that. But then a couple of weeks later we heard that we were getting this spin-off, which was super exciting and I was just super happy to be working with most of the same people.”

Getting the gig on Jessie.

“I was nine years old and auditioned for that in New York. Usually with auditions you kind of are done with it, you don’t really think about it anymore. It’s kind of like, ‘If they cal, they call. If they don’t, they don’t. Ad I’ll just probably move on to something else.’ So they didn’t call at first and maybe it took, I’m going to say, two months, and they [called and] were like, ‘Oh we want you to screen test in L.A.’ So we flew out to L.A. the next day and I screen tested. Then we came back to New York, and two days later they told me that I got the role.”

Balancing school with a thriving career.

“Usually I am home schooled. When I’m onset I’m not doing school but when I am off of set, when I’m not in a scene or something, I just go straight upstairs and I have two teachers up there, and we all do school in a classroom. So we’re all in like this same school program. It’s not as hard as people think with balanc[ing] out acting and doing school, but whenever I’m not rehearsing, or I have like a little break, I’ll just go up to school. And that’s how I manage it. We have to do four hours [of school] by law, so actually it’s pretty fun being in a classroom with the whole cast and we sometimes joke around. It’s not that hard.”

What she does with her spare time.

“I like to hang out at my best friend Jacob’s house. We always go roller skating together, or we’ll go to Six Flags, or we’ll just hang out by the pool, or we’ll just like walk down the street and get something to eat. Usually I just like to relax because I am working most of the time and especially because I’m working throughout summer. So when I have a couple of days off to sleep in and relax, I try to do so.”

How a career in show business came to fruition.

“When I was a baby, my mom submitted my pictures to some modeling agencies because my family was like, ‘Oh submit her pictures and we’ll see what’s going to happen.’ She did and two  modeling agencies wanted to take me so we chose one, of course. I kind of first started doing print when I was a baby, and then when I was like one or two [years old] I started doing commercials. I started doing movies as I got older; like four, and five and six [years old]. So I’ve been working basically my whole life.”

Other passions outside of acting.

“Since I was really little I’ve liked fashion. So when I was like four [years old], I would have Barbie dolls and make dresses out of ribbons. So if I wasn’t acting I would try to start maybe an online clothing company, which I would love to do now. I do love fashion and a lot of my fans say, ‘Oh, you should make a YouTube channel. You should make like this, a clothing line or whatever.’ I’m hoping to do [it] soon so my fans can rock some clothes by me.”

“On a daily basis, when I’m not working, my mom does my hair. On Wednesday night (before shoot days), my mom twists my hair to press it and I’ll sleep on it. The next morning I’ll go to the studio and they’ll take it out. But when I’m not working my mom usually does it, and my go-to style is usually the twist out I do, or when I just want to give my hair a break I’ll do some braids or a bun.”

Words of wisdom for aspiring entertainers.

“I would say never give up on your dreams, and if you really want to do something then go out and try. It’s not going to happen right away. I didn’t get on Disney channel right away. It took a couple of years later. But I just kept on believing in myself and I said to myself, ‘I’m going to accomplish my goal, and I’m going to try auditions for Disney.’ When I auditioned for ‘Jessie,’ if I didn’t get it I wouldn’t have been sad because it’s like, ‘At least I tried.’ So never give up on your dreams.”

Follow Skai Jackson on Twitter, Instagram and Facebook. Catch her and her fellow co-stars in the premiere of BUNK’D on the Disney Channel tonight. The series makes its debut after Descendants. Check out a sneak peek of the show below!