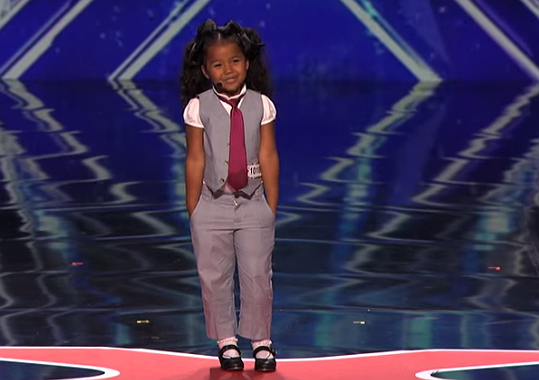 Did anyone catch Heavenly Joy Jerkins on ‘America’s Got Talent’ this past Tuesday? Wasn’t she the most? The 5-year-old sang and danced to ‘In Summer’ off the Frozen soundtrack, and absolutely impressed the judges.

“Kid, you’re going places. I’m telling you,” said Howard Stern after Heavenly’s smash hit performance. “When I was young, I used to watch Shirley Temple movies on TV. I think Shirley Temple is living somewhere inside of you.” Of course, Heavenly corrected the television personality by telling him that it was “not Shirley Temple [but] Jesus” living inside of her. Precious!

While many, including a few of the judges, were shocked to see Heavenly’s incredible talent, fans of Joy Enriquez and Rodney Jerkins were not all that surprised to see her performance. After all, it was just a few weeks ago that the 5-year-old was featured on her father Rodney Jerkins’ Instagram page while singing ‘War’ by Charles Jenkins. Heavenly put everything she had into the song and delivered powerful notes.

Joy and Rodney Jerkins have three kids. Heavenly is the couple’s oldest daughter. Watch her full performance on ‘America’s Got Talent’ below!